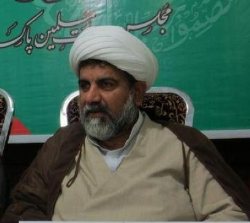 He noted at the beginning, the western countries had tried to stop Iran from pursuing nuclear program by putting unjust sanctions on the country.

“But I salute the leadership of Iran for not yielding to western pressure and standing firm upon their ground,” said Allama Raja Nasir Abbas Jafari.

He said that the leadership and people of Iran have become an excellent example for resistance.

The MWM chief opined that steadfastness of Iranian leadership has forced the US and its allies to change their aggressive approach towards Iran.

The political leader was of the view that US historical defeat in Syria was also one of the reasons that made Washington decide to solve disputes with Iran.

He added that US and Europe are going through crucial economic crisis and cannot afford to start another military misadventure.

ˈThe US was eager in resolving Iran’s nuclear issue because its economy is deteriorating,” said the MWM leader.

He urged other Muslim countries to follow independent foreign policies to maintain their sovereignty.

The political leader said after the victory of Iran’s Islamic Revolution, the country has emerged as a strong power.

He added that the US and western media have tried all out efforts to portray a dark image of the Islamic Republic but they have failed to accomplish their evil designs.

The MWM chief added that Supreme Leader of Iran has played a vital role in resolving the country’s nuclear issue.

Wisdom of the Supreme Leader has forced the western powers to accept Iran’s peaceful nuclear right, the Allama stressed.

He said that Supreme Leader guided the Iranian nation in dealing with the western conspiracies and because of his leadership Iran has achieved the status of a respectable nation.

Allama Raja Nasir Abbas Jafari added that the Supreme leader is the spiritual guide of the whole Islamic world.

The anti-nuclear weapon decree issued by the Supreme Leader had ended all justifications made by the West against peaceful nature of Iran’s nuclear program.

Despite all western efforts, Iran has finally acquired peaceful nuclear technology which is a great achievement, said the political leader.