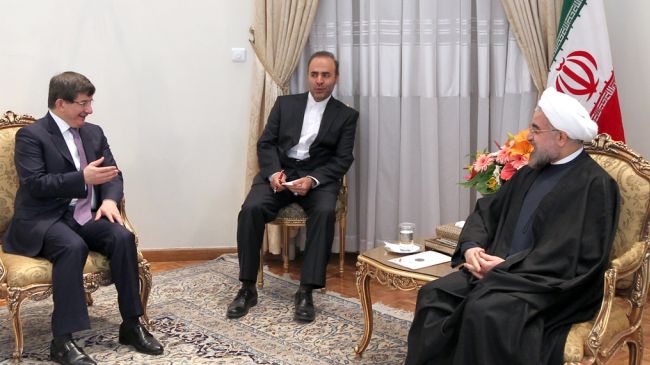 Iranian President Hassan Rouhani says the recently-sealed nuclear deal between Tehran and the Sextet of world powers has removed obstacles to the expansion of Iran’s ties with other countries.

Rouhani made the remarks in a Wednesday meeting with Turkish Foreign Minister Ahmet Davutoglu who attended the 21st Meeting of the Council of Ministers (COM) of the Economic Cooperation Organization (ECO) in Tehran on Tuesday.

Iran and the six powers — the US, Britain, Russia, China, France and Germany — inked an interim deal in Geneva on November 24 to pave the way for the full resolution of the West’s decade-old dispute with Tehran over its nuclear energy program.

In exchange for Iran’s confidence-building bid to limit certain aspects of its nuclear activities, the Sextet agreed to lift some of the existing sanctions against the Islamic Republic.

Rouhani further emphasized the need for further enhancement of Iran-Turkey relations in different areas and said, “Tehran and Ankara should bring the volume of their trade ties to an acceptable level in 2014.”

The Turkish foreign minister, for his part, hailed the new nuclear accord between Iran and the six world powers, saying that the historic agreement would lay the groundwork for broader ties between the Islamic Republic and world countries.

Davutoglu stated that Tehran and Ankara have promoted their economic relations to the highest level possible over the past decade despite all sanctions imposed against the Islamic Republic.

During the meeting, the two sides also exchanged views on the latest developments in the Middle East including Syria, which has been grappling with a deadly turmoil since March 2011.