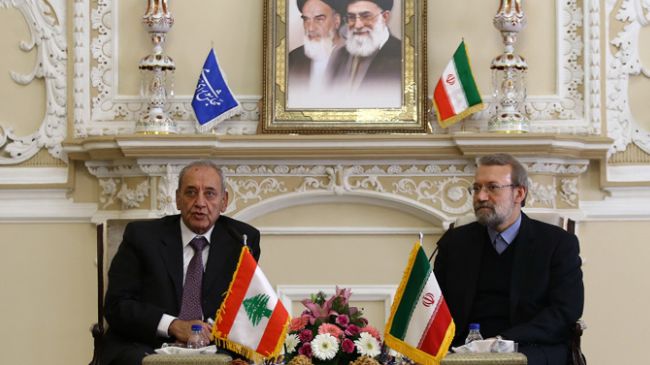 After more than four days of intense negotiations, Iran and the five permanent members of the UN Security Council — the US, Britain, Russia, France and China — plus Germany, sealed an interim deal in Geneva on November 24. It aims to pave the way for the full resolution of the West’s decade-old dispute with Iran over its nuclear energy program.

In a Monday meeting with Iran’s Majlis Speaker Ali Larijani in Tehran, Berri expressed condolences for the terrorist attacks outside the Iranian Embassy in Beirut and said countries which support terrorism in the region seek to create tension in Lebanon.

The Lebanese resistance will never allow anybody to pose any threat to the security and peace of the people in Lebanon, he added.

Supporters of terrorism in the region which sustained a defeat in Syria intend to inflict damage on Iran, Syria and Lebanon as the axis of resistance, Berri stated.

He emphasized that Iran’s stance is the factor behind stability and perseverance of the resistance axis in the region against the Israeli regime.

At least 25 people, including Iran’s Cultural Attaché to Beirut Ebrahim Ansari and the wife of another Iranian diplomat, were killed and more than 150 others injured in two explosions that targeted the Iranian Embassy in Beirut’s southern neighborhood of Janah on November 19.

Larijani, for his part, said certain world powers and the Israeli regime are trying to cause concern among regional countries over the recent developments.

“Maintaining and promoting security and peace in the region are among the main priorities of the Islamic Republic of Iran’s foreign policy. The security of Iran and regional countries, particularly neighbors, are intertwined,” the Majlis speaker added.

He stated that support for terrorist and extremist groups is a “big strategic mistake” which would cause many problems in the region.