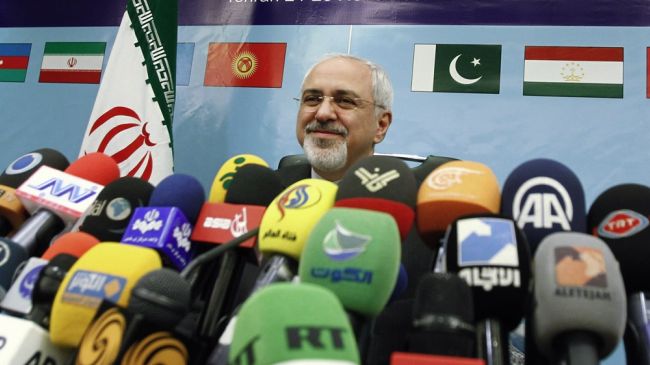 Iran Foreign Minister Mohammad Javad Zarif has expressed cautious optimism over the prospect of Iran’s nuclear talks with the Sextet of world powers.

Speaking to reporters after the 21st Meeting of the Council of Ministers of the Economic Cooperation Organization (ECO) in Tehran on Tuesday, Zarif said the six powers entered the talks knowing that for resolving the dispute they had no way but to hold dialogue with the Iranian nation based on “mutual respect and equal footing.”

“This is a reason for optimism along with caution and an open eye with regard to the continuation of the talks,” Zarif pointed out.

“If there is political will, there is no irresolvable issue in this respect,” he added.

Iran and the six major world powers sealed the interim deal in Geneva on Sunday morning to pave the way for the full resolution of the West’s decade-old dispute with Iran over the country’s nuclear energy program.

In exchange for Iran’s confidence-building bid to limit certain aspects of its nuclear activities, the six world powers agreed to lift some of the existing sanctions against the Islamic Republic.

“We are prepared to take any measure to allay the reasonable concerns about Iran’s nuclear issue, because removing these concerns is among our objectives,” Zarif said.

The Geneva accord would temporarily lift White House executive orders of July 2012 and June 2013 that imposed penalties on countries that trade petrochemicals with Iran.

According to the Iranian Foreign Ministry, the deal allows Iran to continue its activities at Arak, Fordow and Natanz facilities. The agreement also stipulates that no additional sanctions will be imposed on Tehran within the next six months over its nuclear energy program.