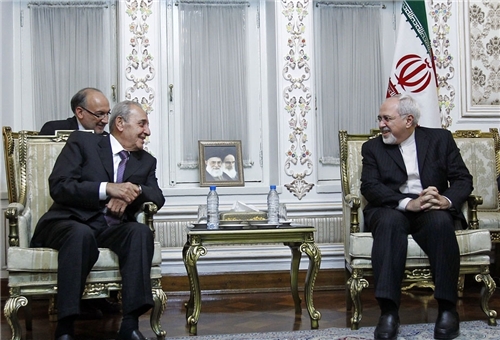 TEHRAN (FNA)- Iranian Foreign Minister Mohammad Javad Zarif, once again, underlined the peaceful nature of Tehran’s nuclear program, and stressed that Tehran is ready to remove any concern that the regional states might have in this regard.

“We are ready for easing the entire rational worries regarding our peaceful nuclear program, while resolutely preserving our nation’s legitimate nuclear rights and continuing our nuclear activities,” the top Iranian diplomat emphasized in a meeting with Lebanese Parliament Speaker Nabih Berri in Tehran on Monday.

Zarif pointed out that Geneva agreement paved the way for good cooperation between Iran and all its friends in the region, emphasizing that the Iranian foreign policy’s definite and non-alienable foreign policy priority is strengthening Iran’s relations with the Islamic and Arab countries, particularly in the reign.

Earlier this month, A nuclear expert underlined that Iran as a signatory to the Non-Proliferation Treaty (NPT) is after utilizing nuclear technology for peaceful purposes.

Behrouz Bayat, a former consultant at the International Atomic Energy Agency (IAEA), said all activities in Iran’s Fordo site are transparent and under full supervision of the UN nuclear watchdog.

As to Parchin site, Bayat said its activities have been exaggerated by the IAEA and its Director-General Yukiya Amano.

He further criticized the disinformation made about the clean-up process of the Parchin site.

Supreme Leader of the Islamic Revolution Ayatollah Seyed Ali Ayatollah Khamenei has on many occasions said the Islamic Republic considers the pursuit and possession of nuclear weapons “a grave sin” from every logical, religious and theoretical standpoint. On April 17, 2010 Ayatollah Khamenei issued a fatwa declaring that the production, stockpiling, and use of nuclear weapons are all haram (religiously prohibited).

“Iran is not after a nuclear bomb. Why would Iran want a nuclear bomb? Moreover, when an atomic bomb is detonated, it does not just kill enemies. Rather, it kills innocent people as well, and this goes against Islamic beliefs and the principles of the Islamic Republic of Iran.

Analysts believe that the fatwa of the Leader of the Islamic Revolution can well serve as a beacon of light for Washington in order to find its way out of darkness and ignorance.