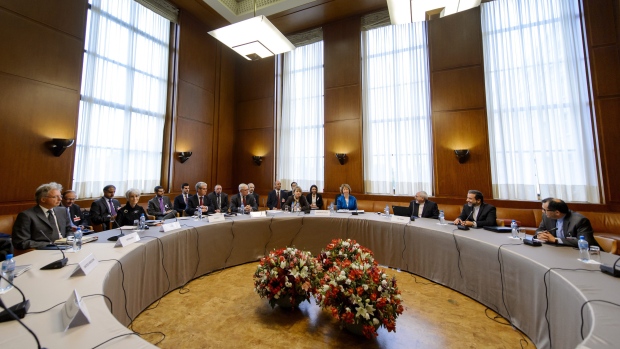 GENEVA — The euphoria over the signing of a historic nuclear agreement with Iran gave way to sober reality Sunday as the parties clashed over a key element of the deal and congressional skeptics threatened to thwart it.

The Obama administration moved quickly to sell the agreement to nervous U.S. allies, particularly Israel, and to persuade lawmakers not to push ahead with new economic sanctions that could prompt Iran to abandon the six-month freeze on its nuclear program set under the accord. In interviews, Secretary of State John F. Kerry defended the deal, saying that the United States and its allies believe that the agreement ensures Iran will either abide by the terms or face the reinstatement of measures that have crippled the country’s economy.

Kerry also acknowledged that keeping the deal on track could prove to be more arduous than securing the landmark agreement had been.

“The next phase, let me be clear, will be even more difficult, and we need to be honest about it,” he told reporters after the pact’s first phase was approved by diplomats from Iran and six major world powers. “But it will also be even more consequential.”

The deal, sealed in a pre-dawn signing ceremony Sunday in Geneva, freezes or reverses progress at all of Iran’s key nuclear facilities, barring it from adding new centrifuges and capping, or in some cases eliminating, stockpiles of uranium that Western officials fear could be turned into fuel for a nuclear weapon.

Iran also agreed to unprecedented, daily monitoring by international inspectors and committed not to finish construction of a controversial heavy-water reactor that could provide the country with a source of plutonium for a nuclear bomb if the government decided to pursue one. Iran has long insisted that its nuclear program is intended for peaceful, energy-producing purposes.

In Tehran, officials welcomed the deal as the beginning of a new era for the Islamic republic, with President Hassan Rouhani asserting that language in the agreement affirmed Iran’s right to enrich uranium, which he and other top Iranian officials had demanded as an element of any agreement.

“Let anyone make his own reading, but this right is clearly stated in the text of the agreement that Iran can continue its enrichment, and I announce to our people that our enrichment activities will continue as before,” Rouhani said in a statement broadcast live on television in Iran on Sunday morning.

Kerry and other U.S. officials who had sought to find language that would satisfy Iran without implying legal recognition of a right to enrich uranium disputed that interpretation.

“There is no inherent right to enrich,” Kerry said on ABC’s “This Week,” in an apparent reference to the Non-Proliferation Treaty, which is silent on whether a country’s right to pursue nuclear energy for peaceful purposes also allows for the enrichment of uranium. “Everywhere in this particular agreement it states that they could only do that by mutual agreement, and nothing is agreed on until everything is agreed on.”

The Geneva pact received a significant boost Sunday as a key Senate proponent of Iran sanctions indicated that he would defer imposition of additional measures to see whether Iran keeps its promises. But Sen. Robert Menendez (D-N.J.), chairman of the Foreign Relations Committee, also said the agreement did not go far enough in rolling back Iran’s nuclear program, and he said the Senate would not “abstain from preparations to impose new sanctions on Iran should the talks fail.”

Menendez said new sanctions legislation being considered by his chamber would include a six-month window to allow diplomats to negotiate permanent limits to Iran’s nuclear program. But other prominent lawmakers, including Sen. Charles E. Schumer (N.Y.), the third-ranking Senate Democrat and the chairman of the Rules and Administration Committee, said they would consider pushing for new sanctions in defiance of the Obama administration.

The agreement reached in Geneva “makes it more likely that Democrats and Republicans will join together and pass additional sanctions when we return in December,” Schumer said. “I intend to discuss that possibility with my colleagues.”

Other lawmakers and conservative think tanks slammed the pact, saying it granted Iran economic relief that was out of proportion to Tehran’s nuclear concessions. Although the agreement would keep the harshest economic sanctions in place, some experts said any significant relief would lead to a collapse in the system of economic restraints that has cut Iran’s oil exports in half and decimated its currency.

“Iran has broken the back of the Western sanctions regime,” said Mark Dubowitz, a sanctions expert and executive director of the Foundation for Defense of Democracies, a Washington-based think tank. “It is an illusion to believe that sanctions will not be eroded significantly by this deal.”

Even as Congress weighed in on Sunday’s accord, the Obama administration was preoccupied with preparations for the next steps. During the coming weeks, teams of Iranian and Western experts will work on technical aspects of implementing the agreement, including how to carry out ramped-up inspections of nuclear sites and procedures for giving Iran access to some of its frozen bank accounts.

Other specialists are working on the framework for the comprehensive nuclear deal to be negotiated with Iran by late spring. The stakes this time will be substantially higher, as Western governments will seek concessions that Iran has fervently opposed, including dismantling several of its key nuclear facilities. Iran, for its part, is expected to demand a suspension of sanctions on its oil and banking industries, relief that would require approval from Congress.

Having achieved a breakthrough in Geneva, negotiators can plausibly begin work on the long-term plan aimed at eliminating international concerns about an Iranian nuclear weapon. But it will be anything but easy, said Kenneth M. Pollack, a Brookings Institution senior fellow and author of “Unthinkable: Iran, the Bomb and American Strategy.”

“We should recognize that that step may prove far, far more difficult than the agreement just negotiated,” Pollack said. “The complexities are far greater. The concessions that both sides will be required to make will be far more painful.”