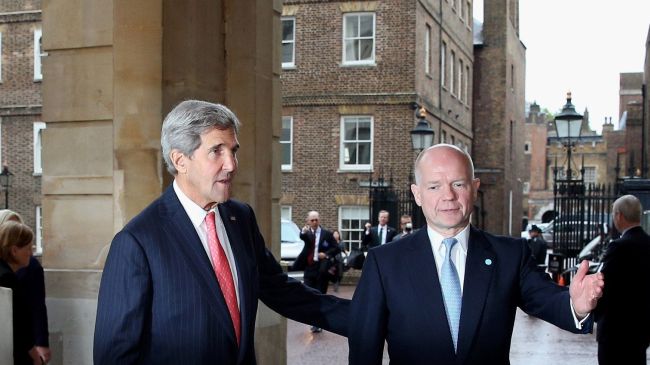 US Secretary of State John Kerry and his British counterpart, William Hague, have expressed satisfaction with the nuclear agreement signed between Iran and the Sextet of world powers in Geneva.

At a joint press conference in London on Sunday, both officials expressed hope that future talks with Iran over the country’s nuclear energy program yield result.

“Now the really hard part begins, and that is the effort to get the comprehensive agreement,” Kerry said.

Both Kerry and Hague attended the Geneva talks before heading to London for bilateral meeting.

The British foreign secretary praised the agreement as “a good deal for the Middle East and for the world”.

Earlier, US President Barack Obama welcomed the deal as “an important first step toward a comprehensive solution.”

After more than four days of intense negotiations, Iran and the five permanent members of the UN Security Council — the US, Britain, Russia, France, China– plus Germany, sealed an interim deal in Geneva on Sunday morning to pave the way for the full resolution of the West’s decade-old dispute with Iran over the country’s nuclear energy program.

Meanwhile, Israel has described the deal as a “historic mistake” with Foreign Minister Avigdor Lieberman calling the deal Tehran’s “greatest diplomatic victory” as the country has gained recognition for its “legitimate right to enrich uranium.”

In exchange for Iran agreeing to limit certain aspects of its nuclear activities, the United States and its allies have agreed to lift some of the existing sanctions and offer access to a portion of the revenue that Tehran has been denied through these sanctions.