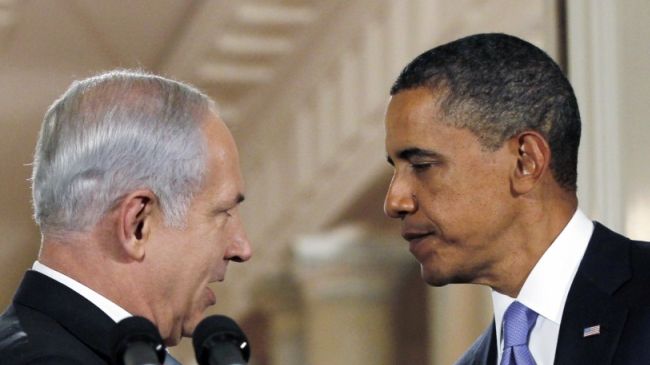 ILNA: US President Barack Obama phoned Israeli Prime Minister Benjamin Netanyahu after reaching an interim nuclear deal with Iran, promising to consult with him on a comprehensive solution, the White House said.

Obama told Netanyahu on Sunday that he wanted to begin consultations “immediately”, after the US and five other world powers reached a deal in Geneva on Iran’s nuclear energy program.

“The two leaders reaffirmed their shared goal of preventing Iran from obtaining a nuclear weapon,” the White House said.

Netanyahu had warned Washington that a diplomatic deal with Tehran would be “a historic blunder.” The hawkish premier responded angrily after the accord was struck, calling it a “horrible mistake.” He added that Israel would not be bound by it.

The deal was announced on Sunday morning following four days of intensive talks between Iran and the five permanent members of the UN Security Council — the US, Britain, China, France, Russia — plus Germany.

Obama reassured Netanyahu that the United States “will remain firm in our commitment to Israel, which has good reason to be skeptical about Iran’s intentions.”

The two agreed to stay in close contact over the next six months as nuclear talks progressed.

The White House called the nuclear agreement an “initial, six-month step.” Over the coming six months, Iran and the six powers will try to reach a final comprehensive deal.

As part of the interim deal, Iran has agreed to limit certain aspects of its nuclear activities, and the United States and its allies have agreed to lift some of the economic sanctions and offer access to a portion of the revenue that Tehran has been denied through these sanctions. No additional sanctions will be imposed.

Some members of Congress have been discussing for months imposing more sanctions on Iran, but they held off after the White House asked for time to let diplomats reach a deal.