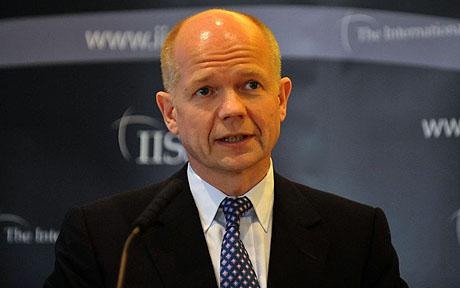 British Foreign Secretary William Hague has praised the new nuclear agreement between Iran and the Sextet of world powers as a momentous event in international relations with Tehran.

“This is an important moment, an encouraging moment, in our relations with Iran,” Hague said in a Sunday interview with Sky News TV network after the nuclear agreement was achieved in Geneva following more than four days of intense negotiations..

“That, we hope, will give us the opportunity to negotiate a comprehensive and final settlement of these issues. So it is certainly an important moment and it has been well worth bringing this about,” he pointed out.

The agreement paves the way for the resolution of the West’s decade-old dispute with Iran over its nuclear energy program.

“Constructive engagement [and] tireless efforts by negotiating teams are to open new horizons,” Rouhani said on Twitter shortly after the announcement.

According to the Iranian Foreign Ministry, the deal allows Iran to continue its activities at Arak, Fordow and Natanz facilities. The agreement also stipulates that no additional sanctions will be imposed on Tehran over its nuclear energy program.