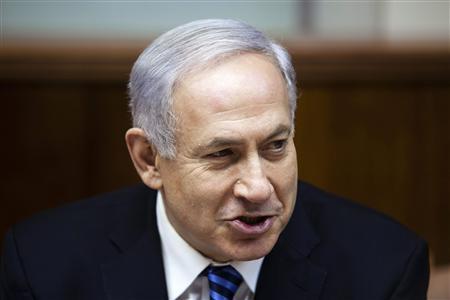 (Reuters) – Israeli stock prices rose to another record high on Sunday, ignoring local politicians’ comments that a deal to curb Iran’s nuclear program was a mistake.

Iran and six world powers clinched a deal earlier in the day to curb the Iranian nuclear program in exchange for initial sanctions relief, signaling the start of a game-changing rapprochement that could ease the risk of a wider Middle East war.

Israeli Prime Minister Benjamin Netanyahu denounced the agreement with Iran as a historic mistake that left the production of atomic weapons within Tehran’s reach. Netanyahu told his cabinet his government would not be bound by the deal.

But Israeli investors ignored such talk from Netanyahu and other lawmakers and doubt Israel will attack Iran on its own.

Bond prices rose, with the benchmark 10-year bond up 0.5 percent for its first gain in a week. Its yield slipped to 3.55 percent from 3.62 on Thursday, the last day of trade for the Israeli trading week.

Analysts noted that gains on Wall Street and in U.S. Treasuries on Friday also helped to boost Israeli markets.

Stock volume was weak at 737 million shekels ($207 million), but turnover is typically lower on Sundays given the lack of foreign investors. The foreign exchange market is closed on Sundays.