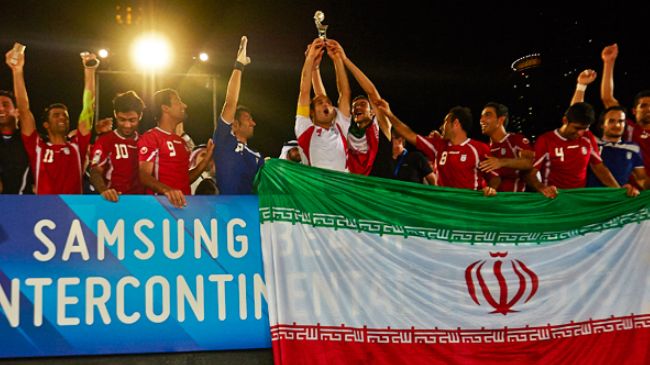 Iran has defeated Russia to win the championship of the Samsung Beach Soccer Intercontinental Cup in the United Arab Emirates.

The Iranians beat the two-time defending Intercontinental Cup champion 4-3 in the final match of the tourney in Dubai on Saturday.

Mohammad Ahmadzadeh struck the opener by a flick header on a magnificent delivery from Iranian goalie Peiman Hosseini one minute into the game.

Minutes later, Andrey Bukhlitskiy gained the equalizer for the Russians and the first period ended 1-1.

Ahmadzadeh took the lead for Iran again in the 11th minute of the third period and captain Ali Naderi scored Iran’s fourth of the day minutes later, but an own goal by Kiani in the last period made the match end 4-3.

Fifteen seconds before the end, the Russians were awarded a penalty kick, which could have equalized the game but Dmitrii Shishin unexpectedly kicked the penalty wide.

On Tuesday, head coach Marco Octavio’s team had beaten Russia 5-3 in a penalty shootout followed by a 2-2 draw.

In another match on Saturday, host UAE beat Switzerland 8-7 to win the third title.