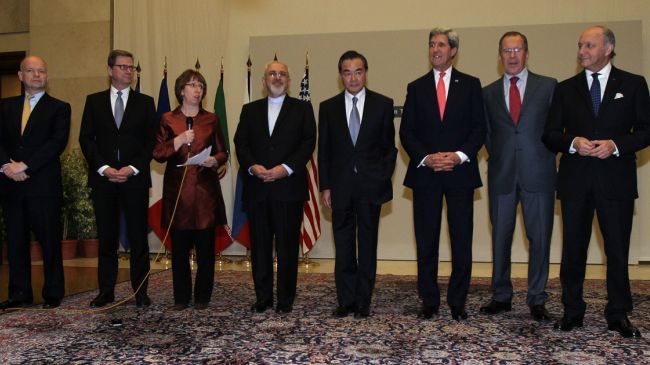 China, Germany and Russia have hailed the deal between Iran and the Sextet over Tehran’s nuclear energy program.

After more than four days of intense negotiations, Iran and the five permanent members of the United Nations Security Council plus Germany sealed an interim deal in Geneva on Sunday morning to pave the way for the full resolution of the West’s decade-old dispute with Iran over its nuclear energy program.

China on Sunday welcomed the deal, saying the agreement with Tehran would “help safeguard peace and stability in the Middle East”.

Russian Foreign Minister Sergei Lavrov also praised the deal and stressed it would benefit all sides. “Nobody lost, everyone ends up winning,” he said.

France, Britain and the US – the other members of the six-nation group – have also welcomed the agreement.

Addressing journalists on Sunday after the announcement of the deal, Iran’s Foreign Minister Mohammad Javad Zarif said Iran’s right to enrichment has been recognized in the deal.

Zarif said that the agreement “covers several important domains, the most important of which is the recognition of the right to enrichment.”

The top Iranian diplomat noted that the interim deal is an “important achievement” but a “first step” toward resolving an “unnecessary crisis”, stressing that the two sides need to work together based on “equal footing, mutual respect and common benefits” to settle the dispute over Tehran’s nuclear energy program.