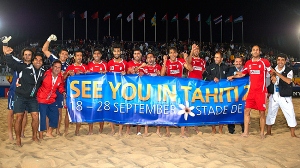 TEHRAN (FNA)- The Iranian beach football team beat the United Arab Emirates (UAE) in a semi-final match and reserved a seat in the final match of the Intercontinental Beach Football Cup 2013 in Dubai.

The Iranian beach football team defeated the UAE 2-1, and became qualified for the final match in the championships.

The Iranian beach footballers won the European champion, Italy, in its third match on Thursday.

The two teams drew 4-4 in the regulation time but the Iranians won the Group B encounter 7-5 in the penalty kicks on Wednesday.

In its first game on Tuesday, Iran won beat world champion Russia 5-3 also in a penalty shootout followed by a 2-2 draw.