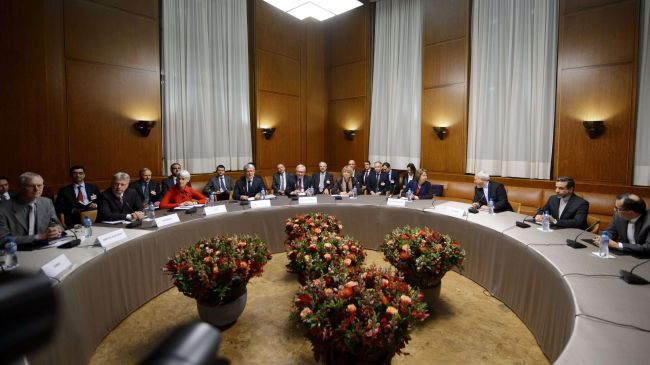 The third round of nuclear negotiations between Iran and P5+1 is well under way in Geneva.

The Road to Sanctions – and Talks

At the onset of the 1979 revolution, Iran abandoned its nuclear power program. However, the considerable damage to Iran’s infrastructure during the Iran-Iraq war, and the demand by the growing population prompted the Iranian government to revisit and resume its quest for nuclear power. It announced these intentions in 1982. Thereon, the United States made every attempt to stop Iran – unsuccessfully.

In 2002, Israel provided the means to place further obstacles in Iran’s path. It provided the MEK terrorist group a report indicating Iran had undertaken clandestine activities. Iran came under scrutiny for building nuclear sites (which it was entitled to as an NPT member). In 2003, as an act of goodwill, Iran voluntary suspended its enrichment program for two years and allowed intrusive inspections in order to alleviate concerns over its peaceful nuclear program (The Iran-EU Agreement).

To understand what pursued, it is imperative to review the Nuclear Non-Proliferation Treaty (NPT), to which Iran is a signatory. The main pillars of the NPT are non-proliferation (Articles I & II), disarmament (Article VI), and peaceful uses of nuclear energy (Articles III and IV). While Article IV reiterates the “inalienable right” of member states to research, develop, and use nuclear energy for non-weapons purposes, Article III demands that non-nuclear-weapon States party to the Treaty “undertake to accept safeguards, as set forth in an agreement to be negotiated and concluded with the International Atomic Energy Agency.” Iran concluded such an agreement with the IAEA.

There is consensus that Iran has not proliferated. In other words, it has not weaponized or helped another state weaponize, nor has it received or delivered weapons material from or to another state. This much is indisputable. Furthermore, in 2005, the IAEA reported that all declared fissile material in Iran had been accounted for, and none had been diverted.

Yet, contrary to its findings, and in direct conflict with the safeguard agreement it had concluded with Iran, specifically Article 19 (the Agency may refer Iran to the UN Security Council if it is “unable to verify that there has been no diversion of nuclear material required to be safeguarded under this agreement, to nuclear weapons or other nuclear explosive devices”), the IAEA reported that Iran “had violated Tehran’s IAEA safeguards agreement.”

What led to this decision was a push by the United States. This was made possible due to the fact that there is no definition of non-compliance. As the prominent Arms Control Association opines: “Surprisingly, although the IAEA Board of Governors has determined on five occasions that a state was in noncompliance with its NPT safeguards agreement-Iraq (1991), Romania (1992), North Korea (1993), Libya (2004), and Iran (2006)-there remains no established definition of noncompliance.”

Noteworthy that the United States contributes about 25% of the total IAEA Technical Cooperation budget. The lack of definition allowed flexibility to enforce a political motivation. America’s ability to impose its will was not limited to the IAEA. As former Assistant Secretary for Non-proliferation and International Security at the US State Department, Stephen G. Rademaker confirmed: “The best illustration of this is the two votes India cast against Iran at the IAEA. I am the first person to admit that the votes were coerced.”

Iran’s nuclear dossier was sent to the United Nations Security Council. Politics and America’s might prevailed at the expense of international treaties – and Iran. Sanctions – war by other means, were imposed on Iran. Numerous rounds of negotiations have only brought harsher sanctions – and progress in Iran’s civilian program.

According to Western sources, there have been three demands placed on Iran: 1) limiting the 3.5% enriched uranium, 2) suspension of 20% enriched uranium, 3) halting the construction of the Arak heavy water plant. It has also been reported that Iran is required to ratify the Additional Protocol. Given that the talks hang on these issues, they must be explored.

Limitations on 3.5% enriched uranium – Uranium enriched below 5% is strictly used for fuel. There are several reasons why Iran has ‘drawn a red line’ on its right to enrich uranium:

Bulletin 26 – Dual Use: Avoiding The Nuclear Precipice of the International Network of Engineers and Scientists Against Proliferation (INESAP) confirms that Iran’s share in the French uranium enrichment plant – Eurodif, and France’s refusal to supply Iran with [its own] enriched uranium for use in its power plants, which according to them, justifies Iran’s desire to exercise her inalienable right under Article IV of the NPT to enrich uranium indigenously versus importing from any other country.

As important, if not of more concern to Tehran, is the undeniable fact that prior to the Iranian revolution the United States had signed National Security Decision Memorandums (NSDM) that demanded of Iran to be a hub for enriching and distributing uranium to profit the United States.

Furthermore, given the rising demand and cost of uranium, Iran is being asked not to enrich its indigenous uranium, and instead be exploited in the same manner that Africans have been exploited with regard to their resources. As explained by Halifa Sallah: “So they getting the raw materials from Africa at very cheap prices and they were processing and selling it back to us at more expensive prices.” In the same vein, Iran is being asked to import its fuel needs at a higher cost to benefit the potential providers.

Suspension of 20% Enrichment – 20% enriched uranium is used to produce medical isotopes. In a 1999 report by the Department of Energy two important issues stand out – a coming shortage in medical isotopes, and a promise of new treatments such as ‘isotopes for cancer therapy and pain control.’

There are simply not enough medical isotopes to meet demand. It is important to note that Iran uses LEU (low enriched uranium) of under 20% to produce medical isotopes. In sharp contrast, the United States supplies weapon-grade uranium (HEU, 90-percent 235U) to the Canadian radioisotope producers. Not only are there inherent dangers (and legal hurdles) in transporting weapons grade material, but also the conversion of HEU to LEU is a feat in itself.

Demanding a stop to the production of medical isotopes in the face of growing demand and shortage reflects the callous nature of the demands being placed on Tehran.

The Arak Heavy Water Plant – The media, egged on by Western countries, has been quick to refer to Arak heavy water plant as a ‘plutonium plant for making bombs.’ This is patently false.

Any reactor fueled by uranium can be used to produce Plutonium, including light water reactors. According to World Nuclear Association, “Plutonium, both that routinely made in power reactors and that from dismantled nuclear weapons, is a valuable energy source when integrated into the nuclear fuel cycle.” Reactor grade plutonium is a by-product of typical used fuel from a nuclear reactor. Weapons grade plutonium is recovered from uranium fuel that has been irradiated 2-3 months in a plutonium production reactor.

It is worth mentioning here that Japan, a close American ally, has more plutonium than any other non-weapons state, with enough plutonium stored in Japan to build 1,000 weapons. In fact, the United States circumvented laws to provide Japan with plutonium.

Arak is a heavy water reactor (HWR) of the type highly recommended by the IAEA. A 2002 IAEA publication encouraged the use of heavy water reactors stating: “HWR technology offers fuel flexibility, low operating costs and a high level of safety, and therefore represents an important option for countries considering nuclear power programmes.” Contrary to NPT commitments, the Treaty is being used as a political tool ‘doling out’ assistance to chosen allies, while depriving others.

The current negotiations are said to be a ‘beginning’ in which Iran has to meet the above demands in exchange for ‘some easing of sanctions’, and with ‘all options on the table’. This cowboy diplomacy has been in the making for years.

In 2007, while still a junior senator, Barack Obama had “crippling sanctions” in mind for the Iranian people when he introduced S. 1430 in 2007. His commitment caught the attention of AIPAC’s president and a major donor to his campaign: Lee Rosenberg. In 2008, during his presidential run, he addressed AIPAC:

“Our willingness to pursue diplomacy will make it easier to join our cause. If Iran fails to change course when presented with this choice by the United States it will be clear to the people of Iran and to the world that the Iranian [government] is the author of its own isolation and that will strengthen our hand with Russia and China as we insist on stronger sanctions in the Security Council.”

But Mr. Obama’s vision is as limited as his knowledge of Iranians. During the Iran-Iraq war, isolated, disarrayed, and reeling from a revolution, Iran repelled not only Iraq’s attacks, but all its backers including America, European and Arab states. Today, Iran is in a much stronger position not only by virtue of its defense forces, its determination and accomplishments, but also due to its relations with the outside world. Iran has the full backing of the Non-Aligned Movement’s (NAM) 120 countries as well as powerful allies including Russia.

These negotiations present a unique opportunity – not for the United States, but for the revival of international law and treaties – and the rejection of imperialism. Let us hope that the opportunity is not plundered.

This article was written by Soraya Sepahpour-Ulrich for the opinion page of the Press TV on November 21,2013.