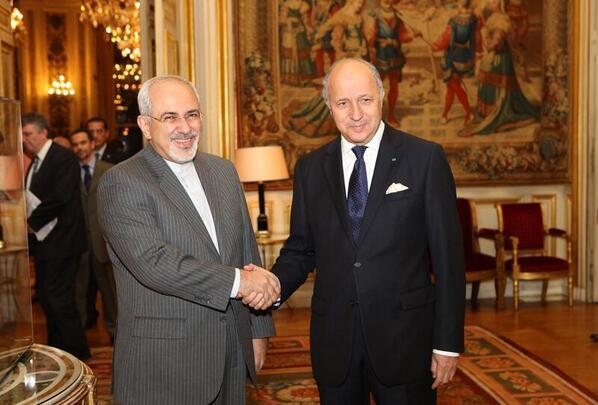 GENEVA, Nov 21 (Reuters) – France and Iran traded tough words on Thursday before major powers began to negotiate the details of a preliminary accord to curb Tehran’s nuclear programme with Paris warning the West had to remain firm and Tehran deploring a loss of trust.

Each side appeared to be tempering anticipation of an imminent agreement after the United States, Russia, China, France, Britain and Germany came close to winning concessions from Tehran in the last round of negotiations two weeks ago.

Policymakers from the six governments have said an interim accord on confidence-building steps could be within reach to defuse a decade-old stand-off and dispel the spectre of a wider Middle East war over the Islamic Republic’s nuclear ambitions.

But before negotiations began in earnest on Thursday, France and Iran stepped up the rhetoric.

French Foreign Minister Laurent Fabius, who spoke out against a draft deal floated at the Nov. 7-9 negotiating round, was asked by France 2 television if there could be a deal.

“I hope so,” he replied. “But this agreement can only be possible based on firmness. For now the Iranians have not been able to accept the position of the six. I hope they will accept it.”

In what appeared to be a response directly aimed at France, Iran’s Deputy Foreign Minister Abbas Araqchi said: “We have lost our trust … We can not enter serious talks until the trust is restored. But that doesn’t mean that we will stop negotiations.”

Asked how trust could be restored, he said: “If they (the P5+1) create one front and stick with united words.”

The six powers are seeking an interim deal under which Iran would stop producing uranium enriched to a concentration of 20 percent, a relatively short step away from weapons-grade material, commit to more IAEA inspections and stop its Arak research reactor from going into operation.

In return, diplomats and officials have said the powers might agree to the gradual disbursement of Iranian funds frozen in overseas bank accounts, a temporary relaxation of restrictions on trade in precious metals and perhaps suspension of pressure by Washington on countries not to buy Iranian oil.

Iranian Supreme Leader Ayatollah Ali Khamenei on Wednesday repeated in a speech that Tehran would not step back from its nuclear rights and set “red lines” for his envoys in Geneva.

Khamenei also called Israel a “rabid dog”, and criticised France for “kneeling before the Israeli regime”, which Iran has refused to recognise since its 1979 Islamic revolution.

The talks in Geneva began on Thursday with a meeting between Iranian Foreign Minister Mohammad Javad Zarif, Tehran’s chief negotiator, and European Union foreign policy chief Catherine Ashton, who coordinates contacts with Iran on behalf of the six powers. Bilateral meetings will be scheduled throughout the day.

“I’m not saying a deal will get done, but we are now in a process, and we’re entering the core of the subject,” a senior French diplomat said. “The problem now is reconciling the red lines from both sides.”

After years of confrontation, a shift towards meaningful diplomacy between Iran and the world powers took shape after Hassan Rouhani’s landslide election victory on a platform to relieve the Islamic Republic’s isolation and try to lift international sanctions, which are strangling Iran’s oil-dependent economy.

“Lots of progress was made last time, but considerable gaps remain, and we have to narrow the gaps,” said a senior Western diplomat. “Some issues really need to be clarified. I sensed a real commitment … from both sides. Will it happen? We will see. But, as always, the devil is in the details.”