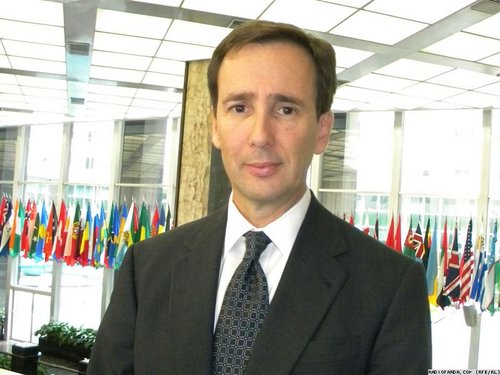 TEHRAN (ISNA)- The US State Department Spokesman Alan Eyre said any solution on Iranian nuclear issue should answer the world’s concerns, but secures the right of Iranian nation for use of peaceful nuclear energy based on the NPT.

He further expressed hope that Iran and the G5+1 could make good progress in the fresh round of talks scheduled for Wednesday in Geneva.

“We have had progress through diplomatic talks between Iran and the G5+1,” Eyre told ISNA, as expressing hope that the negotiators could continue the ‘good progress’ this week.

“The US complies by good will and mutual respect for reaching an agreement which deals with the international community’s concerns on Iranian nuclear issue in a serious atmosphere,” he said.

“There was much progress in the final series of the negotiations, but there are still distances and disagreements. There are important issues which should be dealt with by Iran and the G5+1. All sides have admitted there has been good progress in the recent round of talks through making Iran and G5+1’s positions closer, and we hope they would continue the process of progress.”

He also called for avoiding any prejudgment or rumors on the results of talks, and said, “I want all to avoid believing doubts, rumors or untrue reports or prejudgment on the outcomes of the dialogues.”

Elsewhere, he added that the US administration is in talks with the Congress to prevent imposing further sanctions against Iran during the negotiations.

“The (US) administration has told the Congress clearly that any new sanction will fail to help the process of talks at the moment. President Obama has said that time is ripe to test this diplomatic chance to resolve the issue peacefully and we continue talks with the Congress on this issue.”