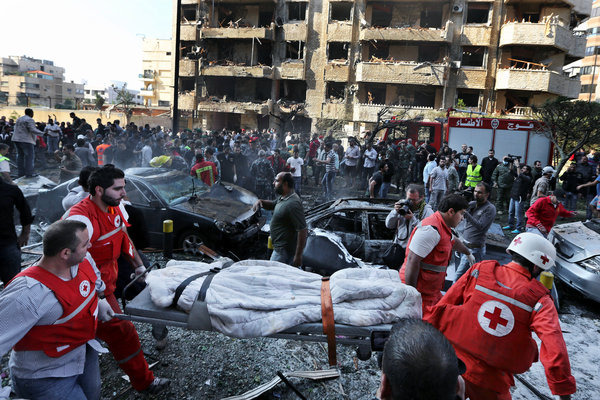 Iran’s Embassy in Lebanon has announced that six Iranian nationals lost their lives in the twin bombings outside the embassy building in the Lebanese capital, Beirut.

According to embassy’s press release, Iranian Cultural Attaché to Beirut Hojjatoleslam Ebrahim Ansari, the wife of an Iranian diplomat and four security guards at the embassy lwere martyred in the terrorist attacks on Tuesday.

Iranian Foreign Ministry Spokeswoman Marzieh Afkham said later in the day that Ansari had been severely wounded in the bombings and taken to a hospital, but he later succumbed to his injuries.

The two blasts outside Iran’s diplomatic mission in the southern neighborhood of Janah in Beirut left at least 23 people dead. The death toll is expected to rise, as many of the wounded are in critical condition.

Over 140 others were also injured in the terrorist attacks.

According to Press TV sources, the first explosion took place when a bomber blew his explosives near the gate of the embassy, and the second blast happened just meters away when a car bomb went off.

In a phone conversation with his Lebanese counterpart Michel Suleiman on Tuesday, Iran’s President Hassan Rouhani called for the immediate identification of the perpetrators behind the attack.

The Iranian president also condoled with Suleiman and the Lebanese nation over the deaths and injuries of a number of people in the bombings.

Suleiman, for his part, condemned the terrorist attacks and said the Lebanese government would do its utmost to identify and bring to justice those behind the bombings.