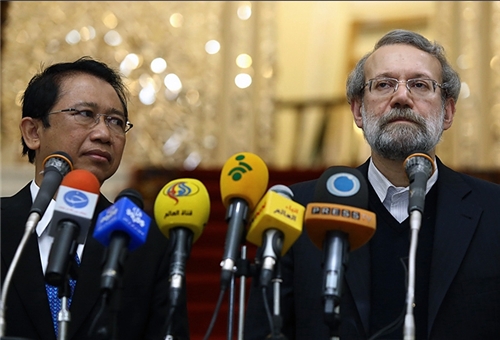 TEHRAN (FNA)- Iranian Parliament Speaker Ali Larijani warned the Muslim countries against the growing number of the Takfiri groups’ terrorist operations, and called for Islamic states’ vigilance and unity against rising extremism in the region.

“Cooperation and alliance among Muslim countries is necessary for confronting terrorist Takfiri groups,” Larijani said in a meeting with the visiting Indonesian Speaker Marzouqi Ali in Tehran on Tuesday.

He underlined that the activities of Takfiri and extremist groups in the region are threatening security, stability and integrity of the Muslim countries.

The Indonesian speaker, for his part, condemned the recent terrorist attacks in Beirut which killed 23 people, including the Iranian cultural attaché and six local embassy staff.

A Takfiri Salafi group has claimed responsibility for the yesterday attack in Beirut.

“Unfortunately the… murder of Muslims… and the flames raging in Muslim countries are due to the presence of these Takfiri currents,” Ayatollah Makarem Shirazi said.

The cleric described the extremists as a tool in the hands of colonial powers that save them the trouble of direct military intervention in Muslim countries.

The cleric further called on all Muslim leaders to join hands to shed light on the nature of Takfiri extremism and inform the public that the militants are a small population with an incorrect interpretation of the Holy Quran.