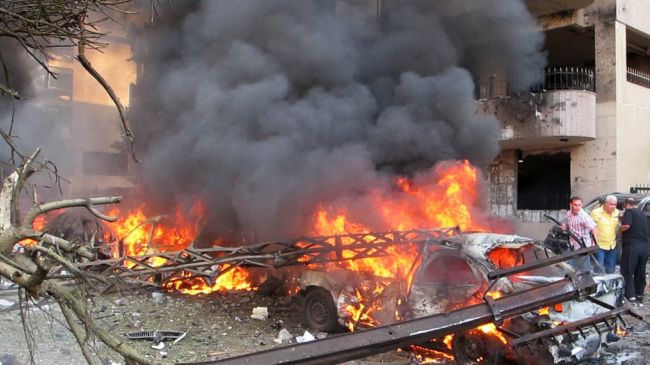 Tuesday’s attack, claimed by Sunni Muslim jihadists, was aimed at Shiite Iran’s alliance with President Bashar al-Assad in neighbouring Syria, raising fears the civil war there could spill into Lebanon.

Thousands of people turned out for a funeral for the four guards, all of whom were members of Lebanon’s powerful Shiite movement Hezbollah, which is also backed by Iran and is fighting alongside Assad’s troops against Sunni-led rebels.

Teary-eyed Hezbollah fighters and other mourners filled the streets, hoisting coffins draped in the movement’s yellow and green flags and chanting against Sunni extremists.

The Lebanese health ministry had earlier raised the death toll after two new bodies were found. Neither could be immediately identified.

An Iranian diplomatic source said Ambassador Ghazanfar Rokn-Abadi and cultural advisor Ibrahim Ansari — who was killed in the blast — had been on their way to see Lebanon’s culture minister.

“The advisor was waiting in the car near the entrance when the first suicide attacker blew himself up. The ambassador, who would have left the building within a minute, went back.”

Ansari, the embassy guards and an Iranian woman were “among the innocent, pure martyrs” of the attack, said Iran’s deputy foreign minister Hossein Amir-Abdollahian, who arrived in Beirut on Wednesday.

The twin suicide attack was claimed by an Al-Qaeda-affiliated group and is the first of its kind against Iran’s mission in Lebanon, which is located in a Hezbollah bastion in southern Beirut.

Iran has had a military advisory mission in Syria since 1980 and played a major role in the emergence of Hezbollah during Lebanon’s own civil war in the 1980s.

Lebanese officials expressed their condolences at the embassy to Amir-Abdollahian and ambassador Rokn-Abadi.

Russian ambassador Alexander Zasypkin said the bombings were an attempt to torpedo a peace conference the United Nations is trying to organise next month with the backing of both Moscow and Washington.

In an interview with AFP, Hezbollah political bureau chief Sheikh Ibrahim Amin al-Sayed denounced the bombings as a “cowardly, desperate act” and dared Hezbollah’s rivals to “come fight in Syria.”