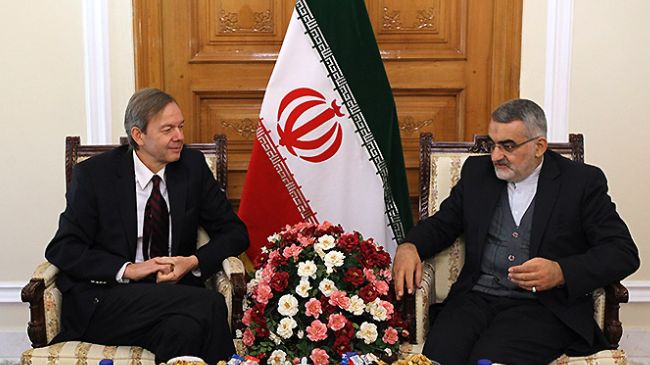 The German ambassador to Tehran says Berlin is very hopeful about a nuclear agreement in talks between Iran and the six world powers in Geneva.

Boroujerdi, for his part, voiced Majlis support of the Iranian negotiating delegation and praised Germany’s “moderate” stance on the talks.

The top Iranian lawmaker, who is on the Majlis National Security and Foreign Policy Committee, also said that lack of an agreement in Geneva would mark a “failure” for the six countries negotiating with Iran.

Representatives from Iran and six countries of the US, France, Britain, Russia, China and Germany are set to start a new round of nuclear negotiations in the Swiss city of Geneva in a few hours.

The Iranian delegation is headed by Foreign Minister Mohammad Javad Zarif while EU foreign policy chief Catherine Ashton is leading the teams from the six nations.

Zarif said on Tuesday that he sees “every possibility for the success” of the talks.

“I think there is every possibility for the success of these talks, provided that the two sides engage in these discussions with good faith and with the political will to resolve the problem,” Zarif said in a joint press conference with his Italian counterpart Emma Bonino.

During the last round of talks in Geneva, a first-step agreement was within reach but the stances of French Foreign Minister Laurent Fabius in favor of the Israeli regime and a lack of commitment by US Secretary of State John Kerry spoiled the negotiations.