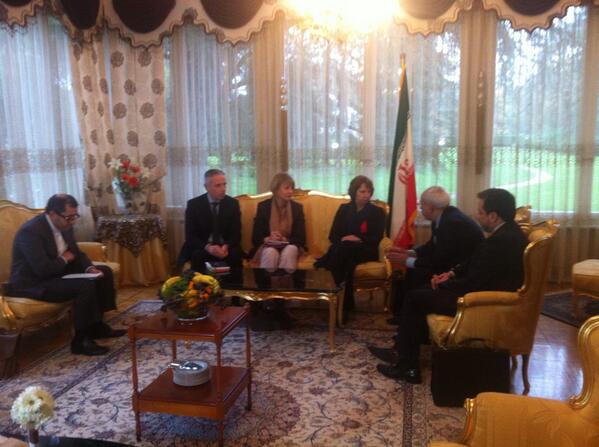 TEHRAN (Tasnim) – As senior diplomats representing Iran and the G5+1 (the five permanent UN Security Council members plus Germany) are preparing to start a fresh round of nuclear talks in Switzerland, there are speculations that foreign ministers of the six world powers might fly to Geneva later.

Iran’s team of nuclear negotiators, led by Foreign Minister Mohammad Javad Zarif, arrived in Geneva on Tuesday evening after a stopover in Rome, where Zarif had a meeting with his Italian counterpart.

They are scheduled to hold a fresh round of negotiations with representatives of the six world powers over Tehran’s nuclear program today.

According to Tasnim dispatches, speculation about the possible visit of G5+1 foreign ministers to Geneva has been fueled after the Intercontinental Hotel rooms were reserved for those top diplomats.

And earlier, the US team, headed by the country’s lead negotiator Wendy Sherman, had arrived in the Swiss city.

In the meantime, the six world powers are going to hold an internal meeting for consultations and coordination ahead of the forthcoming talks with Iran.

Moreover, Iran’s top negotiator, Mohammad Javad Zarif, and the EU foreign policy chief, Catherine Ashton, who represents the six world powers, are to meet later today for necessary planning about the new round of talks between the two sides.

And there are also reports that at the end of the first day of talks between Tehran and the Group 5+1, Iran’s Deputy Foreign Minister Abbas Araqchi will hold a press conference in Geneva.

Reporters from all around the world have poured to the Swiss city to cover the news of high-profile negotiations.

The number of reporters and journalist has seemingly increased compared to the previous round. Swiss foreign ministry said a total of 400 reporters have arrived in Geneva, 50 of whom from Iran.

Russian Foreign Minister Sergei Lavrov expressed hope that talks would be successful. “We hope the efforts that are being made will be crowned with success at the meeting that opens today in Geneva,” he said at a news conference on Wednesday.

He also rejected claims that sanctions imposed on Iran forced it to come to the negotiating table.

“Let’s leave it to historians. It is unforgivable for diplomats to get involved in this senseless talk, because we now have a real chance of reaching a deal in the best sense of the word. If you get distracted on why this is happening, we can miss out this chance,” Lavrov said.

While in Rome, Zarif said he sees “every possibility for success” of nuclear talks between Iran and the six world powers.

“I think there is every possibility for success of these talks, provided that the two sides engage in these discussions with good faith and with the political will to resolve the problem,” Zarif said on Tuesday at a joint press conference with his Italian counterpart Emma Bonino.