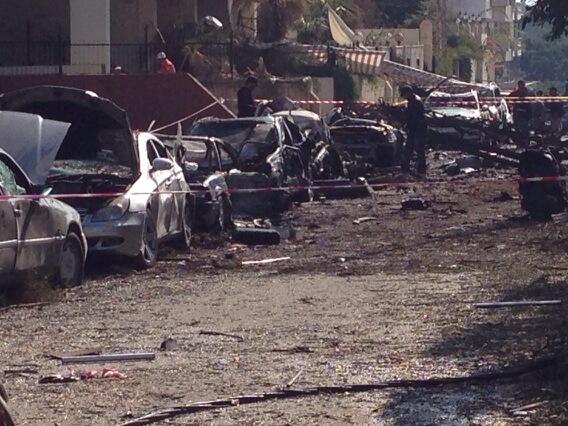 Live footage from local news channels showed charred bodies on the ground as flames rose from the remains of several vehicles. Aid workers and residents carried away some of the victims on blankets.

A Lebanese-based al Qaeda-linked group known as the Abdullah Azzam Brigades claimed responsibility for the explosions, and said was a double suicide attack on the Iranian mission in southern Beirut. Security camera footage showed a man in an explosives belt rushing towards the outer wall of the embassy before blowing himself up, Lebanese officials said

An estimated 23 people another 146 were injured were killed in the explosions, said the country’s health minister.

Sheikh Sirajeddine Zuraiqat, the religious guide of the Abdullah Azzam Brigades, said in a post on Twitter that the group had carried out the attack. “It was a double martyrdom operation by two of the Sunni heroes of Lebanon,” he wrote.

Lebanon has seen several explosions and street clashes in Beirut and the northern city of Tripoli linked to the conflict in neighbouring Syria over the last two and a half years.

Iran’s ambassador Ghazanfar Roknabadi said it was clear the attacks targeted his embassy and identified one of the dead as Ebrahim Ansari, a cultural attache who was on his way to work at the diplomatic compound when the bombs exploded.

“I was waiting at the traffic sign on the street parallel to the Iranian embassy when I heard a loud explosion,” a motorist, who did not want to be identified, told Lebanon’s Daily Star newspaper. “I was terrified. I saw black smoke, but I decided to continue my trip to Shweifat [south east of Beirut],” she added.