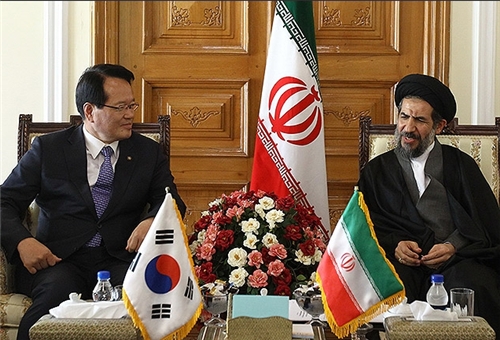 TEHRAN (FNA)- Iran and South Korea once more expressed their enthusiasm for the further bolstering of the relations between the two friendly nations in all domains.

In a meeting between Iranian Parliament First Vice-Speaker Seyed Mohammad Hassan Aboutorabi Fard and Head of Assembly of Representatives from Asian Parliaments for environment and development Liju Yang in Tehran on Sunday, the pair expressed hope the mutual cooperation between Tehran and Seoul would widen in all sector.

“Iranians have had a positive attitude towards friendly ties with South Korea, which help promote bilateral ties in different political, parliamentary, economic, cultural and industrial fields,” the Iranian parliamentarian said.

“Iran and South Korea are the two top powers in Asia,” he said, underlining their numerous capacities for developing ties in different arenas.

Liju, for his part, referred to Iran as a country with rich culture and civilization and said that promoting bilateral ties with Iran is of high importance to South Korea.

“South Korea can use all its capacities for enhancing economic and commercial ties with Iran,” he pointed out.

During the meeting, Safdel pointed to the current status of trade relations between Iran and South Korea, and said, “The exchange of trade delegations between private sectors of the two countries will further help boost mutual trade cooperation.”

He also called for a fruitful cooperation between the Iranian and South Korean free trade zones.

In October, former Iranian President Mahmoud Ahmadinejad underscored the age-old and cordial relations between Tehran and Seoul, and said both Iran and South Korea oppose unilateralism and seek a fair world order.

“Iran and South Korea relations are cultural and historical; both Seoul and Tehran are opposed to unilateralism and oppression in the international relations and want a new world order which would guarantee respect for entire world countries’ sovereignty as well as ensuring peace and justice for all; achieving a new World Order needs cooperation and participation of all nations,” Ahmadinejad said in a meeting with Sung Wung Yeub at the time.

“There are good potentials for expansion of trade exchange as well as the tourism between Iran and South Korea,” he added.

The volume of non-oil trade transactions between Iran and South Korea stood at $6.2bln in 2012.