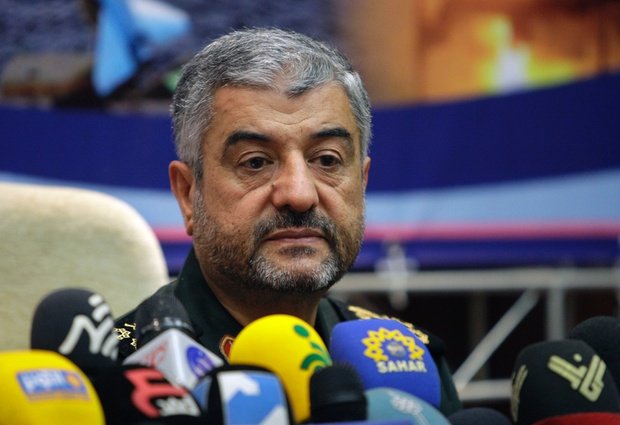 TEHRAN (FNA)- Commander of the Islamic Revolution Guards Corps (IRGC) Major General Mohammad Ali Jafari underlined that the unilateral and multilateral sanctions imposed by the western countries against Iran have resulted in the further backing of the Iranian nation for the Islamic system.

“The enemies are orchestrating many plots against Iran and they are trying to meddle in the country’s affairs through political and security issues in a bid to divert the revolution from its path, and because their moves in doing so have failed to make any success, they have frozen Iran’s assets in world banks and impose a ban on (Iran’s) crude sales,” General Jafari, said addressing a ceremony in the Southwestern city of Ahwaz on Sunday.

“They suppose that they can force the Iranian nation to surrender by doing so, but the outcome of all these sanctions has been the massive presence of the people in the rallies and at the ballot boxes as well as (their growing) support for the Islamic establishment and its noble objectives,” he said.

Earlier this week, Iranian Foreign Minister Mohammad Javad Zarif said Iran would never succumb to the enemies’ pressures as it enjoys the ability to turn sanctions into opportunities, particularly in its nuclear program.

“We had 200 centrifuges eight years ago, but sanctions resulted in our possessing of 19,000 centrifuges at the moment,” Zarif said on Monday.

The Iranian top diplomat also described US sanctions against the Islamic Republic as “unilateral” and “in violation of international agreements”.

Western countries accuse Iran of trying to develop nuclear weapons under the cover of a civilian nuclear program, while they have never presented any corroborative evidence to substantiate their allegations. Iran denies the charges and insists that its nuclear program is for peaceful purposes only.