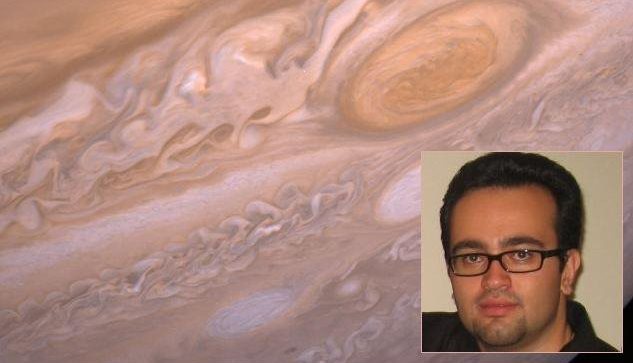 TEHRAN (ISNA)- An Iranian researcher Pedram Hassanzadeh has resolved secrets of Great Red Spot of Jupiter which includes a massive storm near the planet and has lasted for 100 years.

Jupiter’s Great Red Spot is one of the solar system’s most mysterious landmarks. Based on what scientists understand about fluid dynamics, this massive storm – which is big enough to engulf the Earth two or three times over – should have disappeared centuries ago.

Pedram Hassanzadeh, a postdoctoral fellow at Harvard University, and Philip Marcus, a professor of fluid dynamics at the University of California, Berkeley, think they can explain why. Their work also provides insight into persistent ocean eddies and vortices that contribute to star and planet formation.

“Based on current theories, the Great Red Spot should have disappeared after several decades. Instead, it has been there for hundreds of years,” said Hassanzadeh, who is a post-doctoral fellow at Harvard’s Center for the Environment and the Department of Earth and Planetary Sciences.

Many processes dissipate vortices like the Red Spot, Hassanzadeh explained. The turbulence and waves in and around the Red Spot sap the energy of its winds. The vortex also loses energy by radiating heat. Finally, the Red Spot sits between two strong jet streams that flow in opposite directions and may slow down its spinning.

Some researchers argue that the Red Spot gains energy by absorbing smaller vortices. “Some computer models show that large vortices would live longer if they merge with smaller vortices, but this does not happen often enough to explain the Red Spot’s longevity,” Marcus said.

To probe the mystery of the Red Spot’s survival, Hassanzadeh and Marcus built a model of their own. It differed from existing models because it was fully three dimensional and had very high resolution.

Many vortex models focus on the swirling horizontal winds, where most of the energy resides. Vortices also have vertical flows, but these have much less energy.

“In the past, researchers either ignored the vertical flow because they thought it was not important, or they used simpler equations because it was so difficult to model,” Dailygalaxy quoted Hassanzadeh as saying.

Yet the vertical motion turns out to hold the key to the Red Spot’s persistence. As the vortex loses energy, the vertical flow transports hot gases from above and cold gases from below the vortex toward its center, restoring part of its lost energy. The model also predicts a radial flow, which sucks winds from the high-speed jet streams toward the vortex center. This pumps energy into the vortex, enabling it to last longer.

According to Hassanzadeh, the same vertical flow could explain why oceanic vortices, such as those formed near the Straits of Gibraltar, can last for years in the Atlantic Ocean. Their vertical flow plays a role in the ocean ecosystem by lifting nutrients to the surface. Vortices may also midwife the formation of stars and planets, lasting for millions of years as they pull interstellar dust and rocks into large masses.

Hassanzadeh and Marcus know their model does not entirely explain the Red Spot’s long life span. They believe the occasional absorption of smaller vortices, consistent with observation, may provide the extra energy needed for hundreds of years of life. They have begun modifying their computer model to test this thesis.

The observations revealed that the reddest color of the Great Red Spot corresponds to a warm core within the otherwise cold storm system, and images show dark lanes at the edge of the storm where gases are descending into the deeper regions of the planet. These types of data, detailed in a paper appearing in the journal Icarus, give scientists a sense of the circulation patterns within the solar system’s best-known storm system.

“This is our first detailed look inside the biggest storm of the solar system,” said Glenn Orton, a senior research scientist at NASA’s Jet Propulsion Laboratory in Pasadena, Calif., who was one of the authors of the paper. “We once thought the Great Red Spot was a plain old oval without much structure, but these new results show that it is, in fact, extremely complicated.”

Sky gazers have been observing the Great Red Spot in one form or another for hundreds of years, with continuous observations of its current shape dating back to the 19th century. The spot, which is a cold region averaging about 110 Kelvin (minus 260 degrees Fahrenheit) is so wide about three Earths could fit inside its boundaries.

Jupiter’s atmosphere has a zig-zag pattern of twelve jet streams which make up its signature pastel-toned bands. Earth, by comparison, has only two jet streams. The Great Red Spot is sandwiched between two of these jets streams, forcing the winds that power those perimeter winds to deflect around the spot.

Spacecraft observations of the way bands of high winds scream past the Red Spot show how the spot — inaccurately described as a storm — is actually far calmer at its center than other parts of the Jovian atmosphere. The winds at the center are just 9 or 10 miles per hour, whereas around the perimeter they exceed 200 miles per hour.

A new, third red spot, which is a fraction of the size of the two other red spots, has been observed on Jupiter to the west of the Great Red Spot in the same latitude band of clouds. The visible-light images were taken on May 9 and 10 with Hubble’s Wide Field and Planetary Camera.

The new red spot morphed from a white oval-shaped storm to a red color indicating its swirling storm clouds are rising to heights like the clouds of the Great Red Spot. Astronomers surmise that one possible explanation is that the red storm is so powerful it dredges material from deep beneath Jupiter’s cloud tops and lifts it to higher altitudes where solar ultraviolet radiation — via some unknown chemical reaction — produces the familiar brick color.

Because all three oval storms are bright in near-infrared light, they must be towering above the methane in Jupiter’s atmosphere, which absorbs the Sun’s infrared light and so looks dark in infrared images.

Turbulence and storms first observed on Jupiter more than two years ago are still raging, as revealed in the latest pictures. The Hubble and Keck images also reveal the change from a rather bland, quiescent band surrounding the Great Red Spot just over a year ago to one of incredible turbulence on both sides of the spot.

The thermal images obtained by giant 8-meter (26-foot) telescopes used for this study — the European Southern Observatory’s Very Large Telescope in Chile, the Gemini Observatory telescope in Chile and the National Astronomical Observatory of Japan’s Subaru telescope in Hawaii — have provided an unprecedented level of resolution and extended the coverage provided by NASA’s Galileo spacecraft in the late 1990s.

Together with observations of the deep cloud structure by the 3-meter (10-foot) NASA Infrared Telescope Facility in Hawaii, the level of thermal detail observed from these giant observatories is comparable to visible-light images from NASA’s Hubble Space Telescope for the first time.

Unlocking the secrets of Jupiter’s giant storm systems will be one of the targets for infrared spacecraft observations from future missions including NASA’s Juno mission.