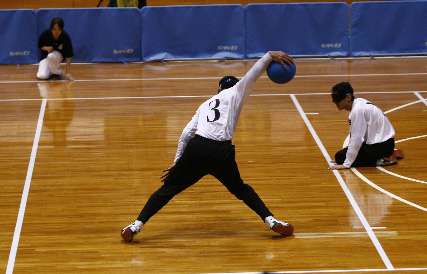 Tehran, Nov 16, IRNA – Iran Men’s Goalball Team on Saturday advanced to the finals of the 2013 IBSA Goalball Asia-Pacific Championships, underway in Beijing, China, while getting a ticket for the 2014 IBSA Goalball World Championships, that will be held in Espoo, Finland, from 26th June to 6th July.

The Iranian goalballers gained the success after defeating the powerful team of the host coutry China 3-2, that had already been champion of the Beijing 2008 Paralympic Games and the 2010 Guangzhou Para-Asian Games. The Iranian team had already trounced the Thai team to reach the semi-finals.

Hassan Jaafari scored two and Mehdi Siahi one goals for Iran in the game.

Iranian team is schduled to face Japan or Australia in the finals on Sunday.

Iran Women’s Goalball Team on Friday stood third in the games to vie for the 2014 IBSA Goalball World Championships for the first time.

On the heels of the European Championships, The goalball action started up on Wednesday, November 13, when the 2013 IBSA Goalball Asia-Pacific Championships began in Beijing, China.

Four women’s and six men’s teams compete for the top spots in the region and qualification spots for the 2014 IBSA Goalball World Championships in Finland.

The men’s and women’s gold-medal games are scheduled for Sunda, November 17.