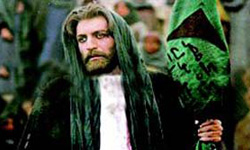 TEHRAN, Nov. 16 (MNA) – Iranian writer Hossein Fattahi has said that “The Fateful Day”, Bahram Beizaii’s play on the tragedy of Ashura, is matchless compared to other works written in this genre about this event.

“Neither in adults’ literature nor in children’s books, there is no work comparable with ‘The Fateful Day’,” he added.

Ashura, the tenth day of Muharram, is the anniversary of the martyrdom of the Imam Hussein (AS) and his companions.

“Beizaii has written the work in an absolutely artistic style and it is sad that no perfect work like ‘The Fateful Day’ has been written about this event for years,” said Fattahi, who is the writer of “The story of Imam Hussein (AS) for Students in Primary Schools”.

He said that Iranian writers have not been able fully to exploit the great potential of the event for dramatic arts.

“The Fateful Day” tells of how Abdollah, a young man who has recently embraced Islam, repeatedly asks for the hand of Raheleh in marriage but is continually turned down by the girl’s father. Finally Raheleh’s father consents to the marriage.

During the wedding ceremony, news of the martyrdom Muslim ibn Aqil, an envoy of Imam Hussein (AS), reaches them before Ashura.

While the relatives of the bride and groom are discussing the marriage terms, Abdollah receives a divine call for help. After a moment of hesitation, Abdollah rises and sets out for the place to which he has been summoned. However, he reaches Karbala on Ashura afternoon, when the Imam and all his companions have been martyred. He receives a call again, asking him to return and tell the people whatever he has seen.

Director Shahram Asadi made a film adaptation of “The Fateful Day” in 1995. Veteran Iranian actor Ezzatollah Entezami said that the movie is the most influential religious movie ever made in Iran.