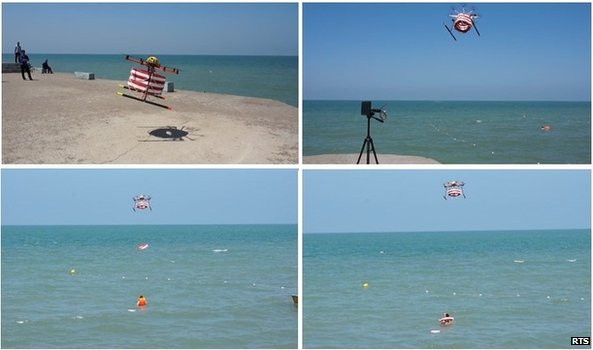 Iranian engineers have tested a drone designed to rescue people at risk of drowning.

The Pars robot has eight propellers and can carry up to three life rings which it can drop within arms-length of potential victims.

The project’s engineers said they were able to reach targets more quickly than a lifeguard in tests carried out near the shore of the Caspian Sea.

But they said more time and funds would be needed to carry out real rescues.

The early-stage experiments were carried out in August, but the details were only recently reported outside Iran by the Robots.net news site.

In them the robot raced against a human lifeguard to reach a person pretending to struggle 75m (247ft) out to sea.

At its fastest, the drone was able to release a life ring to the target within 22 seconds of launch, beating the lifeguard who took about 90 seconds to reach him.

“We carried out 13 tests over a four-day period – some were done at day and a few at night using LED lights,” Amin Rigi, co-founder of Tehran-based RTS Lab told the BBC. 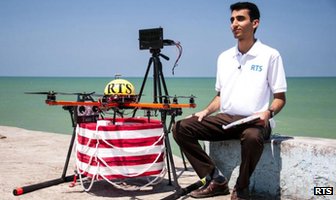 “We had a little bit of difficulty throwing the life tubes at first, but over the following days the operator got better and became very precise.

“We think that [one day] the drone could be used for rescues at coastlines, for offshore missions from floating marine platforms, and also to carry out rescues when floods occur.”

Mr Rigi said the current prototype can move at 36km/h (22mph), stay airborne for up to 10 minutes, and use GPS location technology to return to base.

For now it requires a human to direct it via a remote control throughout the rest of its flight. However, Mr Rigi said his team aimed to automate more of the process.

“We plan to add image processing for the part of the rescue mission after the drowning person has come into the sight of the robot,” he said.

“From that point it should have the ability to do the rest of mission by itself.”

He added that there are also plans to give the robot the ability to land on water in emergency situations, and for it to use an infrared sensor system to spot people in the dark.

News of the research was welcomed by other roboticists.

“[Delivering] greater autonomy will be a challenge. However, I can envisage such devices using thermal cameras so that they can operate at night and under other similar poor visibility conditions that are a real challenge for human rescuers to deal with when trying to locate drowning victims.”

Yvan Petillot, professor of robotics and a member of Heriot-Watt University’s Oceans Systems Laboratory, added that the machines might ultimately work best if paired with other artificial intelligence-controlled floating vehicles rather than trying to deliver the life rings themselves. 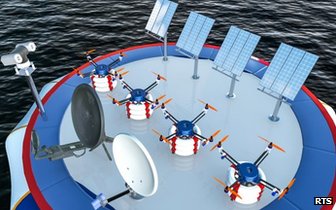 “The current idea might work to monitor beaches in the summer, at least if they can increase the flight-time,” he said.

“But the key problem is that in stormy conditions the controllability of the vehicle is going to be a real issue.

“To me the interesting thing about this technology is the idea of mounting a camera on a flying vehicle, which allows you to explore a bigger area than from a surface craft.

“What you might want is to create a fleet including both kinds of vehicle, with them collaborating together.”

But he added that his team was working to address the problem, and planned to test a more advanced version of the machine in either April or May.