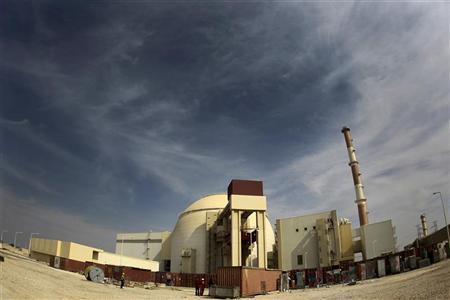 Iran, which plans to have enough nuclear reactors to generate 20,000 megawatts of electricity, hopes the construction of another Russian-built power plant can start after March, said the head of Iran’s Atomic Energy Organization.

“We hope to witness the construction of our country’s second nuclear power plant in the beginning of the new Iranian year,” Ali Akbar Salehi was quoted as saying by the state-runIranian Students News Agency. The new year starts on March 21.

Salehi said the plant would have the capacity to generate as much as 4,000 megawatts and cited Russia’s “readiness” to be involved.

The Russian-built 1,000-megawatt reactor located in Bushehr province is Iran’s first and only functioning nuclear power plant. Iranian officials say they plan to generate 20 times as much nuclear power to accommodate their growing population of 77 million. In August, Salehi said his nation was to sign a memorandum of understanding with Russia to build a second power plant.

Iran is meanwhile talking to Russia, the U.S., the U.K., France, China and Germany over its nuclear program, which the U.S. administration and its allies say could have a military dimension. The previous round of nuclear talks ended in Geneva on Nov. 9 without an initial agreement. Another round of negotiations is scheduled in the Swiss city for Nov. 20.