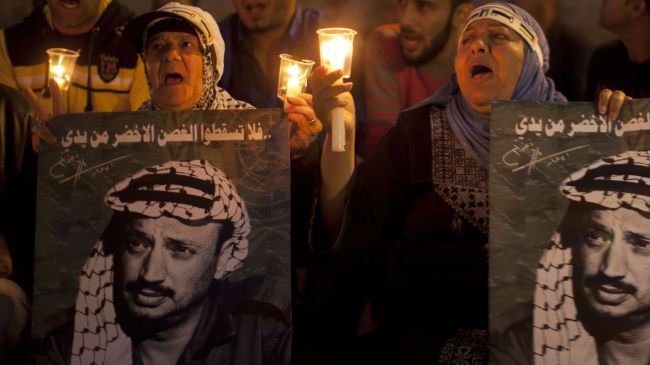 Thousands of Palestinians have marked the ninth death anniversary of the late leader of the Palestine Liberation Organization (PLO), Yasser Arafat.

Carrying portraits of Arafat, the Palestinians marched in several cities in the occupied West Bank to commemorate his demise on Monday.

The Swiss scientists, who tested samples taken from Arafat’s corpse, said the tests showed “unexpected high activity” of polonium-210, which “moderately” supported a theory that he was poisoned to death with radioactive polonium.

The scientists — from the Vaudois University Hospital Centre (CHUV) in Lausanne, Switzerland — carried out a detailed examination of Arafat’s medical records, samples taken from his remains, which were exhumed in November of last year, and items he had taken into the hospital in Paris where he died.

David Barclay, a British forensic scientist who had studied the report, said, “The report contains strong evidence, in my view conclusive evidence, that there’s at least 18 times the level of polonium in Arafat’s exhumed body than there should be.”

Wasel Abu Yousef, a member of the executive committee of the PLO, claimed Israel was behind the alleged poisoning.

“President Arafat passed away as a victim of an organized terrorist assassination perpetrated” by Tel Aviv “which was looking to get rid of him,” he said.

“This report confirms the suspicions that we’ve had all along. We know Arafat was killed; now we know how. And we know who had the means, the opportunity and the motive. Justice must now take its course,” said Hanan Ashrawi, a senior Palestinian leader.

The Israeli regime has denied any involvement in the matter and dismissed the Swiss investigation as “more soap opera than science.”

Arafat died in a French military hospital on November 11, 2004 after he was taken ill the previous month with diarrhea and vomiting.

French doctors have said he died of a massive stroke, although they were unable to find the origin of his illness.

French prosecutors opened a murder investigation in August 2012, after traces of polonium-210 were reportedly found on some of Arafat’s belongings.