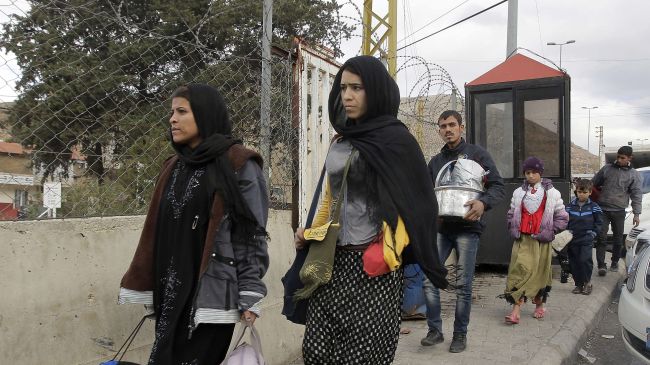 Palestinians fleeing the Yarmouk refugee camp in Damascus are seen at a Lebanese border crossing with Syria, December 2012.

Palestinian refugees who have been forced to leave their camp in the Syrian capital Damascus are facing serious challenges in a refugee camp in the Lebanese city of Sidon, Press TV reports.

Some 90,000 Palestinian-Syrian refugees have left Yarmouk Refugee Camp in Damascus after the now-32-month-long crisis in Syria.

“We left Palestine on foot with our kids by our side. The Israeli planes were above us. After the conflict in Syria, we were then forced to come here. Syria is our home like Palestine. We built houses and had a stable life there. Here, we live in the garbage,” an 80-year-old Palestinian refugee said.

In Syria, Palestinians have maintained a modest, yet comfortable life with good access to governmental services such as education and healthcare. However, those who left Syria to find refuge in Lebanon feel that their lives have been downgraded.

“In Syria we had full rights, the same rights as given to the Syrians. We were normal employees with good salaries. Here we have nothing at all and we did not know that until we arrived in Lebanon,” a male refugee told Press TV.

The Palestinian refugees live in Al-Karami refugee camp in Sidon, which is part of the Ain al-Hilweh refugee camp that houses 45,000 Palestinians who left the Israeli occupation.

Abu Saleh Maadah, the Al-Karami camp advisor, said there are “seventy tents and four bathrooms for all these refugees. Here the Palestinians don’t have enough money to live as prices in Lebanon are much higher than in Syria.”