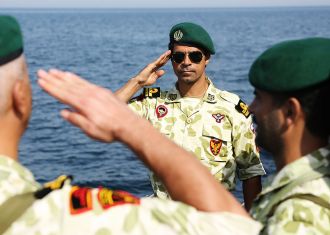 TEHRAN, Nov. 12 (MNA) – Iran’s two-time Olympic gold medalist in taekwondo Hadi Saei has joined a movie project to play the role of a commander of a naval commando unit in a battle, which is set in during the early days of the 1980-1988 Iran-Iraq war.

“Persian Gulf Pearls” is being directed by Hossein Qasemi-Jami on location at the Caspian Sea near the Bandar Anzali, some Persian media announced last week.

“I had repeatedly been offered proposals to play in movies and I kept on rejecting all them,” Saei told the Persian service of MNA.

“But, ‘Persian Gulf Pearls’ is based on a real life drama, so I accepted the offer to appear in the film,” he added.

The film focuses on the key role the Iranian Navy played in the early days of the Iran-Iraq war.

Saei plays the role of Hadi, the commander of the naval commando unit on the Joshan, an Iranian Combattante II Kaman-class fast attack craft.

The Joshan and two Iranian frigates Sahand and Sabalan were sunk during Operation Praying Mantis, which was carried out on April 18, 1988 by U.S. naval forces within Iranian territorial waters in retaliation for the Iranian mining of the Persian Gulf during the Iran–Iraq war and the subsequent damage to an American warship.

Amin Hayaii and Afsaneh Bayegan are other main members of the cast for the film, which is being produced by the Foundation of Martyrs and Veteran Affairs.
Saei won a bronze and two gold medals at the Olympic Games in 2000, 2004 and 2008. He was elected as a member of the Tehran City Council in the 2006 local elections and was reelected in 2013.