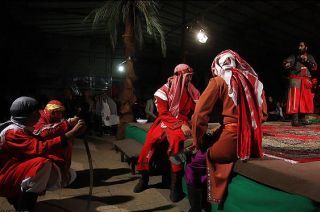 The performances are staged by Ravian-e Eshq Troupe in commemoration of Karbala tragedy occurred to the third Shia Imam, Imam Hussein (PBUH) and his companions during his uprising in Ashura.

Ashura, the tenth day of Muharram, marks the day when Imam Hussein, along with 72 of his companions, was martyred in a battle against the second Umayyad caliph in Karbala, Iraq, more than 14 centuries ago.

The traditional and folkloric play, Ta’zieh, narrates the story of martyrdom of Imam Hussain (PBUH) and his companions in Karbala with its own specific style and rituals.

Ta’zieh rituals symbolize the eternal and unwavering stance of truth against falsehood and humanity’s struggle against tyranny realized by Imam Hussein (PBUH).

This Persian passion play was registered on the UNESCO list during the fifth session of UNESCO’s Intergovernmental Committee in Nairobi, Kenya in November 2011.

Niavaran complex has also held a photo exhibit titled “Ashura Cuisines” as part of the program at the Persian Gulf Hall.