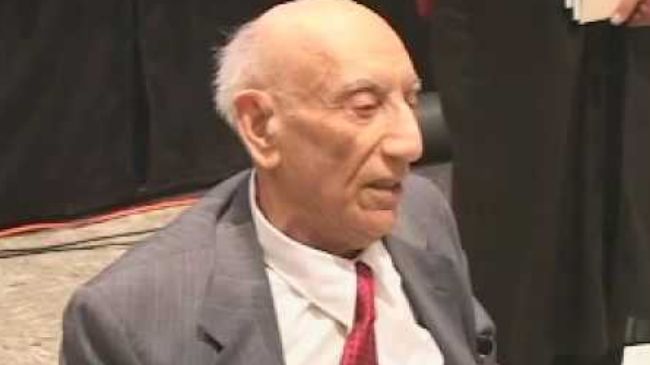 Iranian-American scientist and mathematician Professor Abolghassem Ghaffari has met his death in the United States at the age of 106, ISNA reported.

He was the first Iranian who entered NASA and worked as a senior Mathematician for its several projects and responsible for trajectory calculations that got man to the moon and back.

Born in Tehran (1907), he was educated at Darolfonoun school. Granted full scholarship in 1929, he left the country to France to study Mathematics and Physics at Nancy University.

After obtaining post-graduate diplomas in Physics, Astronomy, and Higher Analysis, he obtained his doctorate from the Sorbonne (Doctor of Sciences with “Mention tres honorable”) in 1936 for basic research on Mathematical Study of Brownian Motion.

In the early 1950s, Dr. Ghaffari worked with Albert Einstein on the Unified Field Theory of Gravitation and Electromagnetism and J. Robert Oppenheimer, who presided over the U.S. atom bomb program during World War II.

Ghaffari joined the Faculty of Sciences of Teheran University where he was appointed full Professor of Higher Analysis from 1941 to 1956.

In 1956, Dr. Ghaffari and Dr. Mohsen Hashroudi were selected as Fulbright Scholars in Harvard University. They were first Iranians who were given this highly credited grant.

At the year he moved permanently to the U.S. and took up a position as a senior mathematician at the U.S. National Bureau of Standards.

In 1964, he contributed to the National Aeronautics and Space Administration (NASA) to put a man on the moon for the Apollo 11 mission, Goddard Space Flight Center.

Ghaffari and his colleagues on the Apollo missions were invited to the White House by President Nixon in 1969, where they were honored with medals for their service on Apollo 11.

He was a Research Associate in Mathematics at Princeton University, and at the Institute for Advanced Study.

He has garnered the distinguished scholar award for his remarkable achievements in science by the Association of Professors and Scholars of Iranian Heritage (APSIH) in 2005.