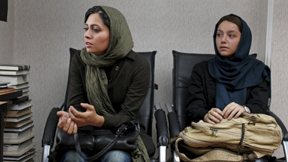 The film is scheduled to contend for awards at the Discoveries section of the 14th edition of the festival.

The section is dedicated to new stories and new ways of telling them by Asia’s most innovative and thought-provoking filmmakers.

The story follows a strong and seemingly naive girl who is beginning her first year at university. The film chronicles her friendship with an outgoing girl that leads her to be trapped in dilemmas of conscience with far reaching consequences.

The movie also competed at the 49th Chicago film festival that took place from October 10 through 24.

Trapped was named as one of Iran’s 12 preliminary nominees for the 2014 Oscar’s Foreign Language Film submission.

The 14th San Diego Asian Film Festival kicked off on November 7 and will run until November 16, 2013.