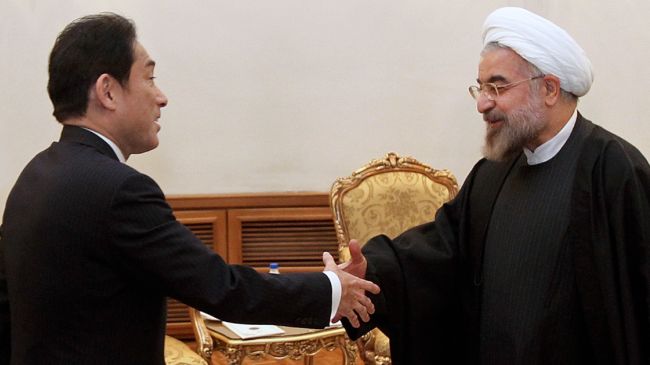 Iran President Hassan Rouhani has urged the six world powers not to miss “exceptional opportunity” in the Geneva talks with the Islamic Republic.

“I hope that the sides negotiating with Iran …will use the exceptional opportunity which Iran has offered the West and the international community so that we can reach a positive result within a logical framework,” Rouhani said in a meeting with Japanese Foreign Minister Fumio Kishida on Saturday.

“The other parties in talks with the Islamic Republic of Iran should pay attention that the current atmosphere is an exceptional one created by [Iranian] people [through participation in Iran’s] June 14 [presidential] election,” he said, adding that Iranians voted for “constructive interaction” with the world.

The president stressed that Iran entered nuclear talks in Geneva, Switzerland with “a strong and positive will.”

He said that Iran wants the world public opinion to know that Tehran’s nuclear energy program is only for peaceful purposes and that all the country’s nuclear activities are carried out under the Non-Proliferation Treaty and the constant supervision of the International Atomic Energy Agency (IAEA).

Rouhani also noted that Iran is ready to alleviate “logical concerns” about its civilian nuclear work should there be any.

The Iranian president stressed that neither sanctions nor suspension were a solution to the standoff over Iran’s nuclear energy program, adding that “the only solution is negotiations based on mutual respect and trust.”

The Japanese official, for his part, hailed positive ambience of talks between Iran and the six world powers and expressed hope that the negotiations would yield favorable results.

Intense negotiations are underway in Geneva between Iran and the five permanent members of the UN Security Council – the United States, China, Russia, France and Britain – plus Germany over Tehran’s nuclear energy program.

The two-day talks began in Geneva on Thursday but stretched into an unscheduled third day as negotiators pressed for a deal on Iran’s civilian nuclear work.