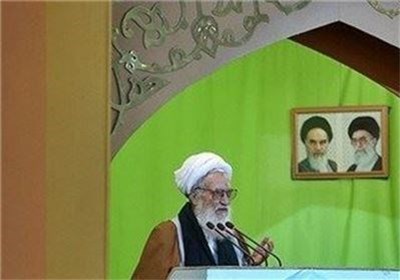 Tehran, Nov 8, IRNA — Interim Friday Prayers Leader Ayatollah Mohammad Ali Movahhedi Kermani warned about the continued conspiracies of the enemies, saying that Iran’s main enemies are the US and Britain—the criminals’ accomplices in the world.

ˈIf we do not recognize the foes, we will continue to sustain blows,ˈ he said.

Addressing the worshippers at Tehran University campus, Movahhedi further hailed the rallies staged nationwide on Aban 13 (Nov 4), adding that the enemies will never stop hatching plots against the nation.

November 4 marks the anniversary of takeover of the US Embassy in Tehran, dubbed the ˈden of espionage,’ by revolutionary students that vowed allegiance to values and principles set forth by the Founder of the Islamic Revolution the late Imam Khomeini.

He also condemned assassination of the publicprosecutor of Zabol city in the southeastern province of Sistan and Baluchestan and called on the relevant institutes to deal with the issues more seriously in a bid to uproot terrorism.