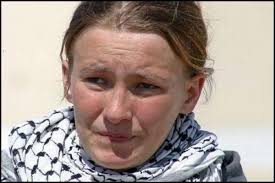 Rachel Corrie’s monument will be installed in Tehran

TEHRAN, Nov. 9 (MNA) – A monument of the known anti-Zionist activist Rachel Corrie is to be placed in Tehran.

The Popular Committee for Pursuing U.S.-Israeli Joint Crimes announced on Friday that it is planning to install Corrie’s monument in one of Tehran’s streets with the same name, the Fars News Agency reported.

Rachel Aliene Corrie was an American peace activist as well as a member of the pro-Palestinian group called International Solidarity Movement (ISM). She was crushed to death by an Israel Defense Forces (IDF) armored bulldozer in Rafah, in the southern part of the Gaza Strip under contested circumstances during the height of the second Palestinian intifada.

Less than two months after her arrival, on March 16, 2003, Corrie was killed after a three-hour confrontation between two bulldozers and eight ISM activists.