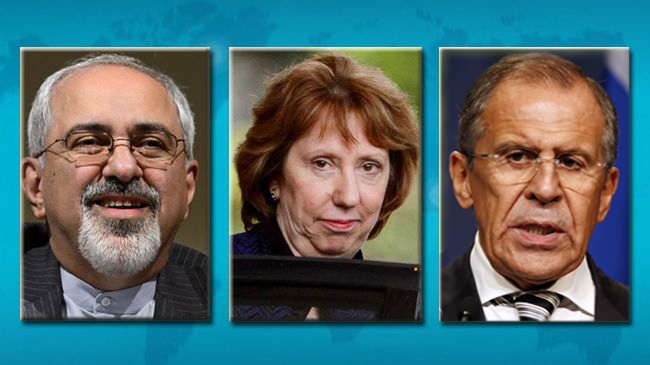 Following his trilateral meeting with US Secretary of State John Kerry and Ashton on Saturday, Zarif held talks with Sergei Lavrov and EU foreign policy chief in Geneva.

After his meeting with Kerry and Ashton, Zarif said if a deal is not reached in the talks over Tehran’s nuclear energy program on Saturday, negotiations could continue in a week to ten days.

Lavrov arrived in Geneva earlier on Saturday to join nuclear talks between Iran and the five permanent members of the UN Security Council – Britain, China, France, Russia and the US – plus Germany.

The Russian foreign minister met with Ashton before their meeting with Zarif.

“Detailed consideration was made of the situation at the current round of negotiations between the P5+1 and Iran, including the evolvement of confidence-building measures and the elimination of concerns over the Iranian nuclear program. Special attention was paid to problems that stand in the way of mutually acceptable agreements,” the Russian Foreign Ministry said in a statement after the meeting between Lavrov and Ashton.

Russian state news agency ITAR-TASS reported that Lavrov intends to consult with his colleagues in Geneva with regards to the nuclear negotiations.

The two-day talks between Iran and the group of six powers started in Geneva on Thursday. Negotiations, however, stretched into an unscheduled third day as negotiators pressed for a deal on Iran’s civilian nuclear work.