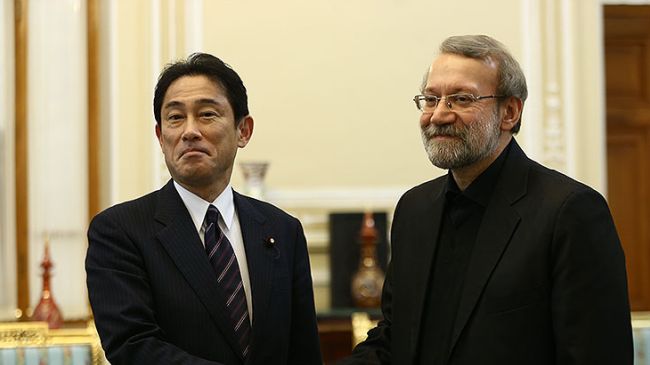 In a meeting with Iran’s Majlis Speaker Ali Larijani on Saturday, Kishida voiced Japan’s willingness to exchange views with Iran with regards to the crisis in Syria and Afghanistan as well as establishing peace and security in the region.

The Japanese foreign minister arrived in the Iranian capital Tehran on an official two-day visit earlier on Saturday to hold talks with senior Iranian officials.

Kishida added that Japan was optimistic about the ongoing nuclear negotiations between Iran and the five permanent members of the UN Security Council – Britain, China, France, Russia and the US – plus Germany in the Swiss city of Geneva.

The talks between Iran and the group of six powers started in Geneva on Thursday. Negotiations, however, stretched into an unscheduled third day as negotiators pressed for a deal on Iran’s civilian nuclear work

Iran Foreign Minister Mohammad Javad Zarif said on Saturday after a meeting with US Secretary of State John Kerry and EU foreign policy chief Catherine Ashton that if a deal is not reached in the talks, negotiations could continue in a week to ten days.

Larijani, for his part, said strengthening relations between Iran and Japan would be conductive to establishing peace and security in the region.

The Iranian official added that the two countries have vast capacities to expand cooperation in various fields particularly oil and gas as well as infrastructure projects, adding that, “Japan’s presence in joint economic and investment activities in Iran would benefit both countries.”

Commenting on Iran’s nuclear energy program, Larijani said, “Iran has never pursued building a nuclear weapon and the peaceful use of nuclear energy, including enrichment, is the right of the Iranian nation.”

The United States, Israel, and some of their allies accuse Iran of pursuing non-civilian objectives in its nuclear energy program.

Iran rejects the allegation, arguing that as a signatory to the nuclear Non-Proliferation Treaty and a member of the International Atomic Energy Agency (IAEA), it has the right to use nuclear technology for peaceful purposes.