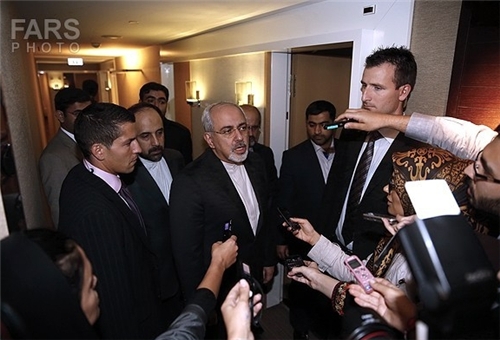 TEHRAN (FNA)- Iranian Foreign Minister Mohammad Javad Zarif underlined that any final deal should be agreed upon by all the seven sides (Iran, the US, Russia, China, France, Britain and Germany) participating in Geneva talks, and said that Tehran under no condition will accept plans written by others.

“We do not accept anyone to write a plan for us (to obey),” Zarif said prior to attending a trilateral meeting with EU foreign policy chief Catherine Ashton and Russian Foreign Minister Sergei Lavrov in Geneva on Saturday.

He underlined that the discussions are now underway over the text of the final agreement palatable to all the seven countries (Iran and Group 5+1).

The Iranian foreign minister also announced that if the seven countries reach no agreement in Geneva tonight, the Iran-G5+1 talks will resume 7 to 10 days later.

Later, Zarif took part in trilateral talks with Ashton and Lavrov in Geneva.

The meeting came as Zarif, Ashton and US Secretary of State John Kerry were discussing the final text of a deal and left their trilateral meeting for a short break.

Zarif also underlined that Iran and the six world powers are close to striking a deal over Tehran’s nuclear standoff with the West and should now start writing the agreement.

“We have now come to the phase of writing the agreement and we have also agreed on certain issues, but it is not yet clear if we can achieve the result tonight,” Zarif said.

The Iranian foreign minister said debates continue after the break, and added, “Now we have to work on the details.”

Meantime, Zarif underlined that “we have achieved agreements on some issues”.

“We have to work on all these issues,” he said, and stressed, “Of course, there is progress” in the talks.

Meantime, Iranian Deputy Foreign Minister Seyed Abbas Araqchi said if a deal is not reached in the talks over Tehran’s nuclear energy program in Geneva on Saturday, the talks will be moved to a later date.

He pointed to Lavrov’s visit to Geneva, and said, “Lavrov has just arrived and we are not certain as yet if a bilateral or a trilateral meeting is going to be held with Lavrov.”

Asked whether Lavrov’s presence will reduce the existing differences between Iran and the Group 5+1, Araqchi responded that the presence of different ministers might help, but Iran and the group of the six countries should make the final decision.

Zarif, Ashton and Kerry held their first round of talks at Ashton’s office at the EU building of the UN offices at 18:30 (local time) on Friday which lasted for about five hours.

Prior to the second trilateral meeting today, Zarif also had quadrilateral talks with Ashton and his German and French counterparts.

Zarif’s Deputy Majid Takht Ravanchi, who is also a senior member of the Iranian team of negotiators, told reporters in Geneva Friday afternoon that the draft agreement has been prepared and would go under debate by the three top diplomats in their trilateral meeting in Geneva.

“The text of the draft agreement has been prepared and initial negotiations (over it) will take place in a trilateral meeting among Zarif, Kerry and Ashton,” Takht Ravanchi said.

“Once an agreement is reached on the text of the deal, the first step will begin, and in case the text of a final statement is finalized, Zarif and Ashton will hold a joint press conference,” he added.

He said since most sanctions on Iran have been imposed by the US, “US Secretary of State John Kerry’s presence in the talks was necessary for a final deal”.

Araqchi, who was speaking to reporters after a second meeting between Zarif and Ashton in Geneva on Friday, explained that the Zarif-Ashton meeting lasted one hour and the two sides discussed continuation of talks, specially at experts level, and how to approach an agreement on the final text of a deal.

“The negotiations have now reached a sensitive and complicated stage which requires their pursuit at higher levels,” the senior Iranian negotiator said.

He said Ashton has invited Zarif to attend a trilateral meeting with US Secretary of State John Kerry for talks on the text of a final agreement and discuss the remaining issues.

Araqchi said that the Iranian foreign minister will also have bilateral meetings with British, German and French foreign ministers who have arrived in Geneva to join the talks.