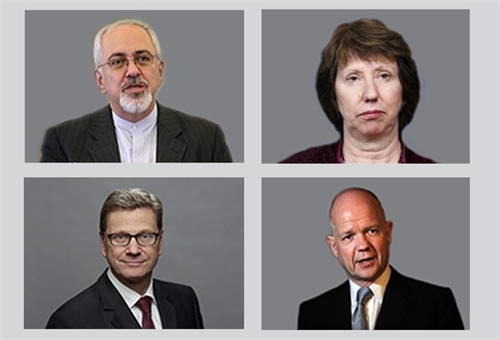 TEHRAN (FNA)- German Foreign Minister Guido Westerwelle and his British counterpart William Hague have voiced their governments’ support for the ongoing talks between Iran and the six world powers (the US, Russia, France, China, Britain and Germany), informed sources disclosed on Saturday.

Speaking to FNA on condition of anonymity on Saturday, an informed source, who is close to Iran’s negotiating team, pointed to a quadrilateral meeting between Iranian Foreign Minister Mohammad Javad Zarif, EU foreign policy chief Catherine Ashton, the German foreign minister and the British foreign secretary, and said, “They have exchanged views over the current topics of the talks, and Germany and Britain have declared their support for the general trend of the negotiations.”

Until Thursday night, Zarif and Ashton, who headed the talks, along with a few experts from the seven parties to the talks were due to meet for a final meeting in Geneva on Friday. But plans suddenly changed on Friday, and French Foreign Affairs Minister Laurent Fabius, Kerry, Hague and Westerwelle rushed to Geneva to join the negotiations. Russian Foreign Minister Sergei Lavrov and his Chinese counterpart Wang Yi also arrived in Geneva on Saturday. Their unexpected attendance in the talks has fuelled the speculation that an agreement is in the making.Both Iranian and the G5+1 negotiators have declined to reveal the details of the possible deal, which is based on an Iranian proposal offered to the six world powers in the last month meeting in Geneva. But after some western media outlets speculated that a halt to Iran’s uranium enrichment activities would be part of the deal, senior Iranian negotiators rejected such reports, saying enrichment is their “redline”.