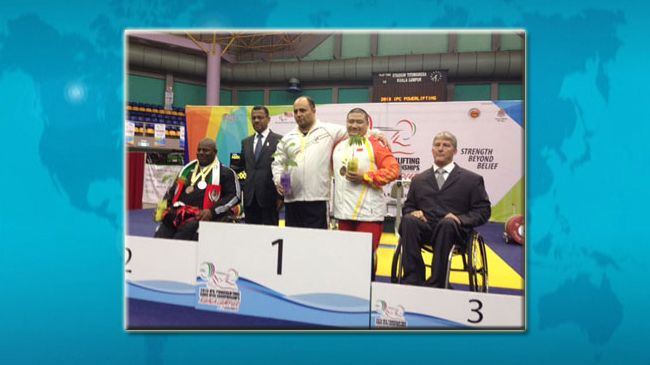 Disabled Iranian weightlifters have picked up one more gold medal at the 2013 International Paralympic Committee (IPC) Powerlifting Asian Open Championships in Malaysia to add to their growing collections.

On Wednesday, 34-year-old Iranian athlete Ali Sadeqzadeh clinched the gold medal at the Titiwangsa Stadium of the Malaysian capital Kuala Lumpur with a lift of 224 kilograms in the men’s 97-kg Asian competition section.

A lifter from the United Arab Emirates (UAE) pushed 223 kilograms to win silver in this category, while a Chinese sportsman eased into bronze with a best of 211 kilograms.

Moreover, the gold medal in the men’s 97-kg free competition class, which has also attracted weightlifting champions from other continents, was awarded to Nigeria’s 35-year-old weightlifter Abdulazeez Ibrahim.

He had a tough opening against Sadeqzadeh, both lifting 217 kilograms to start. Ibrahim’s next attempt was at 225 kilograms, only three kilograms above the Iranian weightlifter.

The Nigerian athlete benched 228 kilograms on his third and best lift to win the gold. Sadeqzadeh had a silver lift of 224 kilograms followed by the UAE’s Mohammed Khalaf in bronze with 223 kilograms.

Around 200 athletes from 30 countries are competing in the 2013 IPC Powerlifting Asian Open Championships, which opened in Kuala Lumpur on November 3 and wraps up on November 7.

The athletes are competing in the championships to achieve the Minimum Qualifying Standard (MQS) for the 2014 IPC Powerlifting World Championships, which will take place in Dubai, the United Arab Emirates, next year from April 5 to 11.