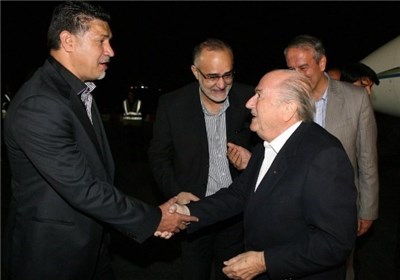 Head of the Iranian Football Federation (IFF) Ali Kaffashian, Secretary General of IFF Mahdi Mohammad Nabi, and a number of Iranian and Asian football players and officials were present at the airport to received Blatter.

Blatter is scheduled to have a meeting with President Hassan Rouhani and to attend a press conference before leaving Iran on Thursday afternoon.

He is also scheduled to meet the Iranian football authorities as well as officials of the country’s sports and youth ministry.

The FIFA top official congratulated Iran for the national Iranian football team’s presence in 2014 Brazil World Cup and said that the Iranian under-17 national football team’s failure to reach the next round of U-17 World Cup was only due to the Nigerian team’s solid teamwork.