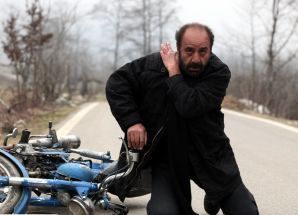 TEHRAN, Nov. 5 (MNA) – The producer of “Bear” has applied for a screening license at the Iranian Ministry of Culture and Islamic Guidance for premiere of the controversial film.

In a press release on Sunday, Javad Noruzbeigi said he hopes that his film would receive a green light for premiere from the moderate administration, which was appointed to the ministry after the victory of Hassan Rouhani in the June presidential election.

The producer had even made some modification to “Bear” to get approval of the Culture Ministry during former president Mahmoud Ahmadinejad’s administration for premiere of the film. However, the ministry refused to authorize it.

The film is about Nureddin, who after having been missing in action during the 1980-1988 Iran-Iraq war, returns home eight years later only to find his wife remarried and the mother of two children. Nureddin struggles to fight reality.

Directed by Khosro Masumi, the film won a Golden Goblet for best feature at the 15th Shanghai International Film Festival in June 2012. It also received nominations in categories of best director and best film at the Asia Pacific Screen Awards (APSA) in October 2012.