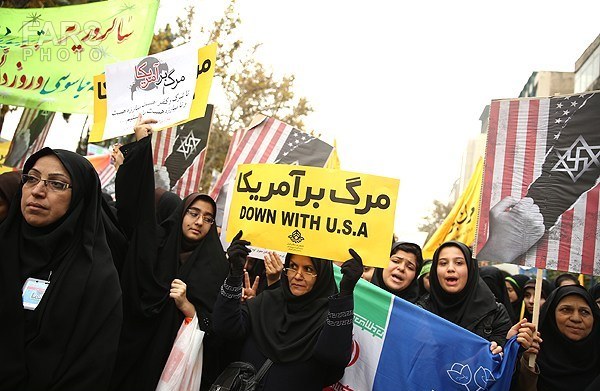 Mistrust of US still deep in Iran

Thirty-four years after siege of US embassy in Tehran, there is still seething anger towards the United States.

The former US embassy in Tehran is stuck in time. Forever a sprawling symbol of the daring that embodied the takeover of the embassy 34 years ago and the subsequent hostage crisis that destroyed Iranian–US ties. A monument to another time – and a monument to the day everything changed forever between two nations. Its roof is rusty, its walls chipped and aging. Anti-US slogans are stamped along the compound in downtown Tehran. Still, it’s quite the sight.

Thousands came to rally, to chant “death to America” and pro-revolutionary slogans on this year’s anniversary. The rest of Iran stayed away. Among the crowds were students, bussed in for the annual excursion. They are far too young to remember anything that happened in 1979 and many were happy to be there just because they weren’t in school. Others had hastily scrawled “Death to America” and “Long live the Supreme Leader” on their hands in pen.

Thirty-four years later many question why the embassy takeover is important – why any Iranian should celebrate a day, which many analysts argue, inevitably and indirectly lead Iran to its current global isolation and closer to economic ruin.

But under the signs and slogans, the propaganda, there is still seething anger towards the United States. Anger that these Iranians will never reckon with. And there is nothing the United States can do to make it go away.

This year, however, there is renewed optimism that the US and Iran will finally find each other on the same path; that these two nations can finally move forward and resume diplomatic ties.

From Iran’s point of view – not just the government but the people, too – the US is responsible for a long list of crimes against the Iranian people, from backing coups, creating the Shah’s savage secret police, SAVAK, to aiding the enemy, Iraq, during eight years of bloody war.

What’s worse is that the US, according to these Iranians, has never shown an inch of remorse for anything it’s done – including shooting down Iran Air flight 655 in 1988. The USS Vincennes incorrectly identified the civilian airliner as a military jet near the Iranian Island of Qeshm, shooting it down and killing all 290 people on board.
Many of those at the rally held up signs of the plane, and that fateful number, 655, to make this point.

Hamid Moayyedi, one of the protesters, said the US has a lot to be sorry for.

“I will never support relations with the US; they cannot be trusted at all. You can’t even find one case when they were honest. They have committed so many crimes, how we can forget them? Their nature is criminal and cruel,” he said.

“If they want to do something they should compensate all our damages, spiritually and physically, if they really want to prove that they are honest. But they can’t, so Iranians will never forgive them and I myself will just be happy when they are completely destroyed.”

Another protester shared that sentiment. “I do not support ties with the US; a wolf cannot change its behaviour. The US pretends it wants to be friends but behind the scenes it is different so I don’t agree with ties and I cannot forgive them. It’s not only me, no Iranian can forget what they have done to us,” said Hamid Reza.

Draped along the embassy walls were also pictures from the Iran Iraq war – an unforgivable crime if ever there was one in Iran. The US supported Iraq’s invasion, armed Saddam Hussein’s government and according to both the United Nations and former US diplomats, at the very least, turned a blind eye when Saddam used chemical weapons against both the Iranian army and civilians.

Rahele, who held up an anti-US poster throughout the rally, has personal reasons for her hatred.

“We don’t really think they will ever apologise to us … The US will never end animosity towards our nation, because they are the enemy of our beliefs … Anyway, we don’t need their apologies. My brother was killed in the war and the US was backing Iraq. So I myself will never forgive them because of the crimes they committed against us.”

A recent poll in Iran shows that the majority of Iranians, close to 80 percent, support the normalisation of relations with the US. But that doesn’t mean, just like those at the rally, they are willing to forget anything. They’re not. Scars here are far too deep to be swept away in a sea of goodwill and optimism. For years, getting to the negotiating table was always seen as the challenge, but perhaps forgetting the past has been the biggest one all along.