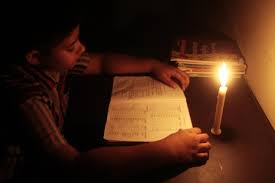 Palestinian officials in the besieged Gaza Strip say that the coastal enclave is facing fuel and electricity shortages because of the Israeli-imposed blockade,Press TV reports.

The only power plant in Gaza has shut down its generators following a fuel shortage, caused by Israel’s destruction of tunnels used for carrying fuel into the enclave.

“The electricity crisis has been ongoing since the Israeli blockade. The main problem is not being able to find ways to provide fuels for power plant, which is 75 percent short of fuel. This is going to affect all sectors of life in Gaza,” said Ahmad Abu al-Omarain, the director of Energy Information Center.

Fathi el-Sheikh Khalil, the energy authority’s deputy chairman, said last week that the Palestinian Authority (PA) had pledged to deliver fuel to Gaza without tax, allowing the Hamas government to buy 400,000 liters of fuel a day. But the PA canceled its offer of tax exemption, making it difficult for Gaza officials to afford the fuel.

“We have been suffering from the fuel crisis since the Israeli blockade. Now the fuel crisis is worsening and the Palestinian Authority in the West Bank canceled its offer of tax exemption,” said Jamal al-Derdsawi from the Electricity Distribution Company.

The Gaza plant supplies about a third of the enclave’s electricity needs. In addition to the power plant, which produces up to 65 megawatts, Israel provides the strip with 120 megawatts and Egypt supplies Gaza with 27 megawatts of power.

However, with the severe fuel shortage, power cuts have been lasting for 12 hours daily since last Friday.

In September, energy authorities in Gaza warned of an impending shortage of fuel and called on Egypt to resume deliveries to Gaza. Egypt has also destroyed supply tunnels leading into Gaza over the past months.

Israel imposed the all-out land, aerial, and naval blockade on Gaza in June 2007.

The siege has had a disastrous impact on the humanitarian and economic situation in the impoverished enclave, having turned the territory into the world’s largest open-air prison.