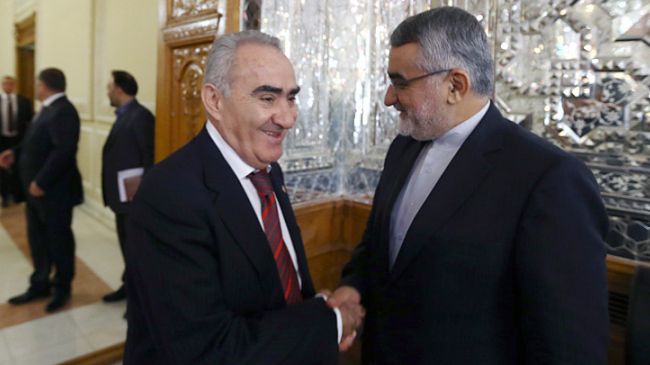 A senior Iranian lawmaker says countries which imposed sanctions against the Islamic Republic have borne the brunt of the bans, adding that anti-Iran restrictions have helped the Iranian nation’s talents to flourish.

“Thorough prudent management, the Islamic Republic of Iran has achieved numerous accomplishments in diverse areas of science and technology in spite of sanctions, and the countries which slapped the sanctions have suffered the most,” Alaeddin Boroujerdi said

The chairman of the National Security and Foreign Policy Committee of Iran’s Majlis made the remarks in a meeting with Head of the Armenia-Iran Parliamentary Friendship Group Galust Sahakyan in Tehran on Sunday.

Anti-Iran sanctions have been imposed based on the unfounded accusations that Iran is pursuing non-civilian objectives in its nuclear energy program.

In addition, the IAEA has conducted numerous inspections of Iran’s nuclear facilities, but has never found any evidence showing that Iran’s civilian nuclear program has been diverted to nuclear weapons production.

Boroujerdi further pointed to the affinity and historical commonalities between the Iranian and Armenian peoples, adding that the two nations have long had friendly relations rooted in peaceful coexistence.

Sahakyan, for his part, described Iran as an important country in the region.

“Not only do senior Armenian officials regard the Islamic Republic of Iran as a neighboring country, they view it as their friend and ally in regional and international spheres,” he pointed out.

On August 5, Iranian President Hassan Rouhani met with his Armenian counterpart Serzh Sargsyan in Tehran and said the Islamic Republic will seek to expand relations with Yerevan.