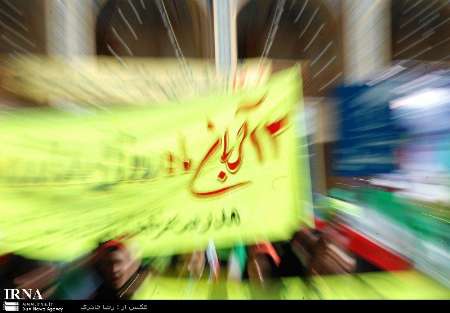 The day marks the anniversary of the takeover of the US embassy in Tehran by the Iranian students in 1980.

Shouting for global justice, the Iranians stage huge demonstrations nationwide to voice their hatred towards the global arrogance and declare their will to fight world arrogant powers.

The 13th of the month of Aban according to the Iranian calendar coincides with the anniversary of sending the Late Founder of the Islamic Republic in Iran Imam Khomeini to exile by the Pahlavi regime in 1964.

The day also is the anniversary of the ruthless killing of school students by the Pahlavi forces in Tehran in 1978.

Large groups of people keep jointing the rallies nationwide and the state television network as well as Iran’s international news networks of the Al-Alam (in Arabic) and PressTV (in English) are conversing the event live.