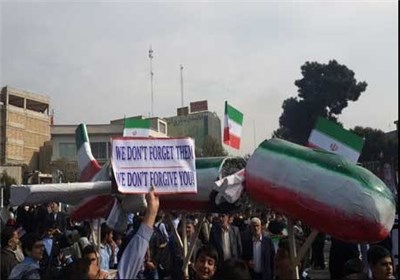 TEHRAN (Tasnim) – A massive crowd of Iranian demonstrators, marking the 34th anniversary of the US Embassy takeover in Tehran, concluded their huge rallies on Monday by issuing a statement expressing fierce opposition to the US.

Huge crowds of Iranian people, mostly school and university students, staged nationwide demonstrations this morning in more than 770 cities around the country to express their opposition to the arrogant attitudes of the enemies, particularly the US.

Demonstrators in Tehran, who were gathering in front of the former US embassy premises, said in their statement that they view the US as the “Great Satan and the nation’s number one enemy”.

The Iranian nation “regards the ‘Death to US’ slogan as the reflection of the Islamic Republic’s anti-arrogance doctrine,” the statement said.

The statement also described that slogan as the main factor of national unity in Iran and the token of aversion to US policies.

The “National Day against Global Arrogance” has its roots in a movement by a group of Iranian students more than 30 years ago.

The students who seized the embassy later published documents proving that the compound was indeed engaged in plans and measures to overthrow the Islamic system.

In the capital city of Tehran, the rallies to mark the anniversary of the landmark move are held at the venue of the former US embassy, which is known by Iranians as “Den of Espionage.”